What Happened In The National League North On Saturday? 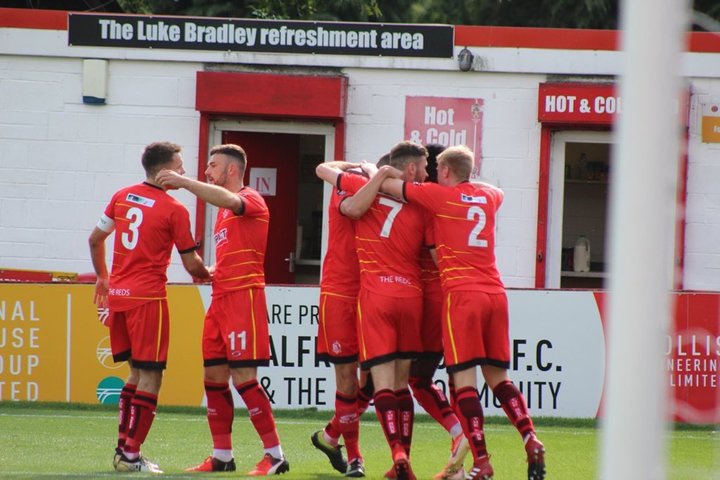 If you like goals, you've come the right place. The back of the net was hit 35 times in this afternoon's National League North games.

The top two sides both failed to win so there was a chance for the chasing pack to make some ground.

Alfreton looked to be cruising to a comfortable win at home against Curzon Ashton.

Amari Morgan-Smith's hat-trick had the Reds in full control but goals from Luke Wall and Matt Regan late on set up a nervy finish at the Impact.

Darlington's miserable form on the road continued as they slipped to their fourth away defeat of the season at Gloucester City.

Joe Hanks either side of Adam Campbell's equaliser for the visitors to give the Tigers their first win in four.

Josh Hancock hit a brace as Altrincham blew away lacklustre Leamington at Moss Lane - Jordan Hulme, Tom Peers and an own-goal also had a hand in the 5-0 win.

King's Lynn were made to work for their point at Spennymoor Town having had to come from behind twice at Brewery Field.

First Adam Boyes and then Michael Roberts put the hosts in front but Adam Marriott and Rory McAuley levelled things up.

Southport went in front at Bootham Crescent through David Morgan before York's Alex Kempster hit the second and final goal of the game.

Aaron Martin's 11th goal of the season wasn't enough for Guiseley who were put to the sword at the Deva.

Chester were already three goals to the good courtesy of an Akwasi Asante double and Ant Dudley's second-half goal before the Lions' in-form forward hit back.

Max Lowe put Brackley in front against AFC Telford but they shared the spoils for the visiting Bucks who were put level from the spot by Marcus Dinanga.

Elsewhere, Farsley crept into the top seven with a win over Kettering - Will Hayhurst with what proved to be the winning goal in the Celts' 3-2 triumph.

Bradford (Park Avenue)'s woes continued in Lincolnshire as a two-minute burst from Boston ended their hopes of a second win of the season.