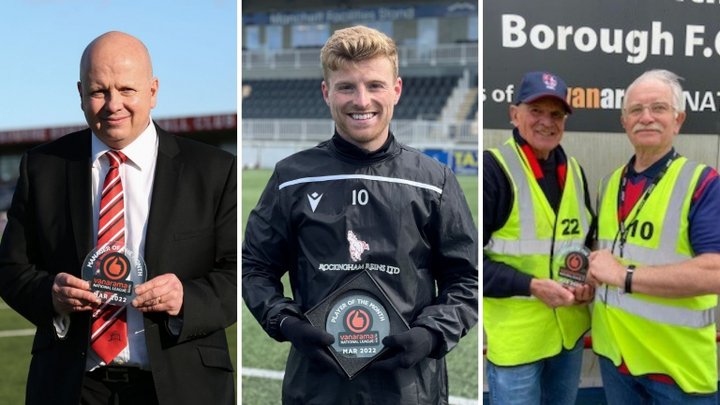 It’s time to put awards in hands in the Vanarama National League South - and there are so very deserving winners.

When Eastbourne Borough manager Danny Bloor sat down with us to assess the season ahead in July, he wanted to paint a picture.

He stopped short of saying it, but you got the feeling simply avoiding a struggle would have been an achievement for the Sports.

So, to end March sitting in fifth and looking good for the play-offs underlines what an incredible campaign it has been - and a wonderful job he is doing.

There was little doubt about this one, five wins from five last month always had Bloor as the boss to beat.

They saw off St Albans, Chelmsford City, Hungerford Town and Bath City but saved their best for Dorking Wanderers.

Going 2-0 down to the then-leaders, they bit back and took an incredible three points. Starting the month in ninth, they are suddenly a fixture in the promotion picture.

Maidstone United are top - but it wouldn’t have been that way without Jack Barham.

The Stones attacker continued his incredible campaign with four more goals in March.

He hit the net twice against Braintree and got important goals against Hungerford and Dulwich Hamlet. It elevated the Kent club ahead of Dorking and now their fans don’t want them to let go of top spot.

Barham won the club’s Player of the Month for February - and has found himself with a nice upgrade four weeks on!

We love the Vanarama Volunteer of the Month award.

Rewarding the richly deserving die-hards who give up their free time for their club, acknowledging their efforts is the least we could do.

Like most volunteers, it’s not just one job they turn their hands to.

Not only are the happy helpers stewards every matchday, they also take on the task of keeping the Beveree ship shape long after the fans have gone home.

John and Mawgan are prominent members, making their voices heard to keep the south west Londoners moving in the right direction.