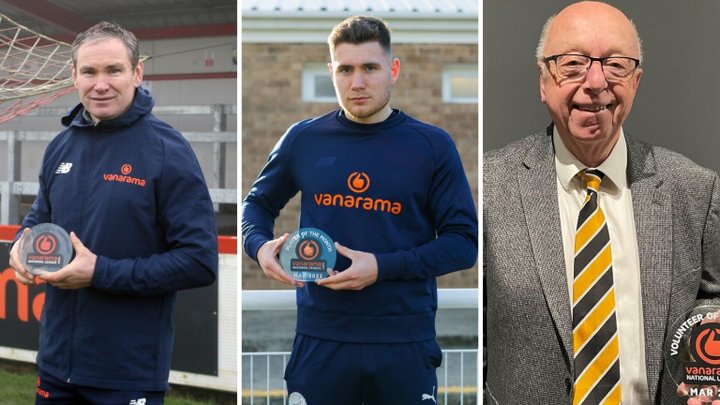 We would like to introduce you to your three fantastic National League North award winners - and here’s why they are the March chosen ones!

It was a massive month for a number of clubs and the panel worked around the clock to ensure the most worthy of winners were recognised for last month’s efforts.

You could slip a cigarette paper between Brackley Town and Gateshead at the top going into their huge game on Saturday.

The title chasers feature in both our awards - and the Manager of the Month goes to the Saints.

Kevin Wilkin has helped Town stay the pace and after losing in the play-offs three of the last four years, Brackley are determined to avoid them this time around.

They started off with a solid 0-0 draw at Southport before they thrashed Guiseley 5-0. They then beat AFC Telford, Kidderminster and Alfreton before only being denied all three points late on by Spennymoor Town in the north east.

They have still let in just 19 goals and with a defence like that, the Northants club can’t ever be counted out.

Wilkin’s wonders helped him to the top boss gong, but it was a case of sensational Cedwyn when it came to the Player of the Month award.

Cedwyn Scott is creating quite the reputation for himself at Gateshead.

Nobody has scored more than the Heed in March in the National League North – they hit 77 goals this season by end of March, only Fulham have more in England’s top six levels

Super Scott had 22 by end of last month – forming one half of a deadly partnership with Macaulay Langstaff, who also has 22.

The striker has almost a third of all of Gateshead’s league goals this season and he got four in five games last month, including the hat-trick that crushed Curzon Ashton.

We love the Vanarama Volunteer of the Month, allowing us the opportunity to honour the great and good around the country.

If you are looking for the voice of Boston United, look no further.

Super fan Mick Fixter is what we call a long server - he’s just celebrated 40 years in his role.

The Pilgrims legendary man on the mic first boomed his voice around York Street in 1981 and loved it so much he’s stayed put ever since.

Like all fans he misses the old place but the Jakemans Community Stadium had a piece of history moving with it - Mick making all the announcements!