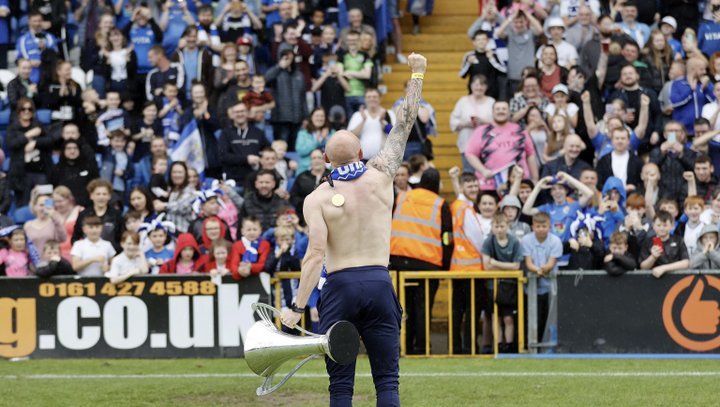 Send out the one-week warning - the National League’s return is now just days away.

There’s a lot to be said for being totally ready from the off so whose squad is really is fine fettle ahead of August 6?

Transfers deals continue to be completed ahead of the big kick-off next Saturday - and there’s been a number of astute captures that have really caught the eye.

FC Halifax have lost their manager and a number of players this summer - even one, for a week at least, to Love Island.

But in Stockport County legend Sam Minihan, pictured, they have got their hands on something special.

It’s been a busy week. Striker Rob Harker joins the Shaymen after his spells with Bury and Burnley, while defender Festus Arthur has also arrived.

Notts County have recruited well this summer but have lost another important player.

Callum Roberts, 25, has switched to Aberdeen after a fee was agreed with the SPL club.

Oldham Athletic have new owners - and a new winger.

AFC Fylde’s Ben Tollitt has agreed to move to the club after an impressive season in the National League North.

Wrexham have done more business. Versatile Anthony Forde has signed from League One side Oxford United for an undisclosed fee.

Boreham Wood have been busy. Jack Payne has arrived, as has midfielder Zak Brunt and Érico Sousa.

Chris Wreh pledged to entertain the Southend United fans after completing his move to Roots Hall.

Gateshead have a new defender after Ethan Pye agreed to play for the Heed next term.

Altrincham have a new look for next season - James Jones is back while Phil Parkinson has also swooped to sign exciting forward Alex Samizadeh.

Solihull Moors have made another move, Callum Whelan arrives from Oldham.

Jez Uchegbulam has linked up with Paul Cook’s Chesterfield after getting his move from Matlock Town for an undisclosed fee.

Spennymoor Town have won the race to sign young defender Finn Cousin-Dawson on a season-long loan from Bradford City.

Lucas Tomlinson has linked up with Gloucester City on a permanent deal.

 Predictions Made! BT Sport Team Make Some Big Calls The National League’s return is now just days away - so we’ve asked the experts to risk it all and put their necks on the line!

What's In A Start? The Champions' First Month Assessed  We know the fixtures are there's no doubt you're busy plotting how many points your side can take from the first few matches.