What Happened On Tuesday Night In The National League? 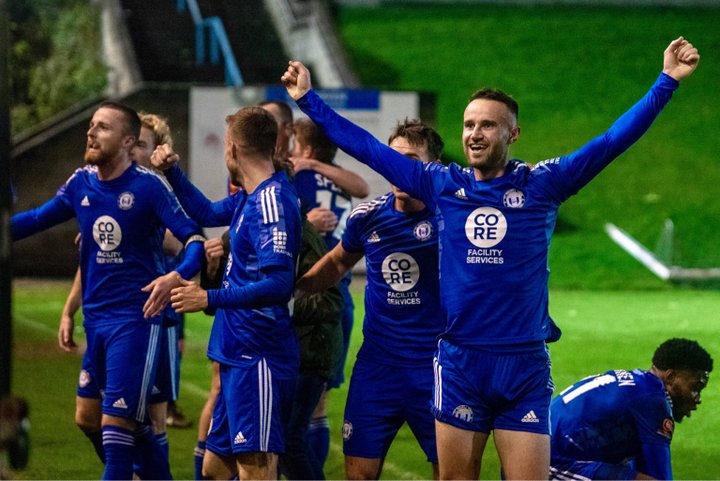 FC Halifax Town were 2-0 down to Notts County when the Shaymen were reduced to ten men.

What happened next totally shocked everyone.

They grabbed a lifeline through Jordan Slew after 79 minutes before - from nowhere - they levelled when Billy Waters stunned the Shay.

Not only did they hold on, they won it in unforgettable circumstances - Matty Warburton’s late, late winner sent the home fans wild, pictured.

Grimsby Town also had ten men and they held firm at Altrincham as they won the battle of the form sides 3-2.

Harry Clifton scored what turned out to be the winner and kept Paul Hurst’s team top of the table.

Paul Mullin’s late levelled secured a point for Wrexham against Chesterfield as an incredible 9,147 watch on at the Racecourse.

Kane Smith and a Scott Boden penalty took Boreham Wood second, they had too much for Torquay United.

Woking have had a wonderful week - they added Dagenham & Redbridge to their hit list after winning at Notts County and against Chesterfield.

Max Kretzschmar’s moment of magic made in nine points from a possible nine.

Southend United gave themselves a huge lift, securing their first win since the opening day.

Aldershot Town needed a win too, Toby Edser got the decisive goal as they left Dover Athletic with a much-desired 2-1 victory

There were two goalless draws, the BT live game between Wealdstone and Solihull Moors and Maidenhead United’s game with Yeovil Town.

There was also some managerial movement on Tuesday.

Kevin Watson departed Billericay Town, while it was the end of the road for Gavin Cowan at AFC Telford United.

Moors Of The Same Or Will The Stones Show Camera Class?  While you can rarely guarantee goals, tonight’s live BT Sport game is as likely to produce the goods as any.