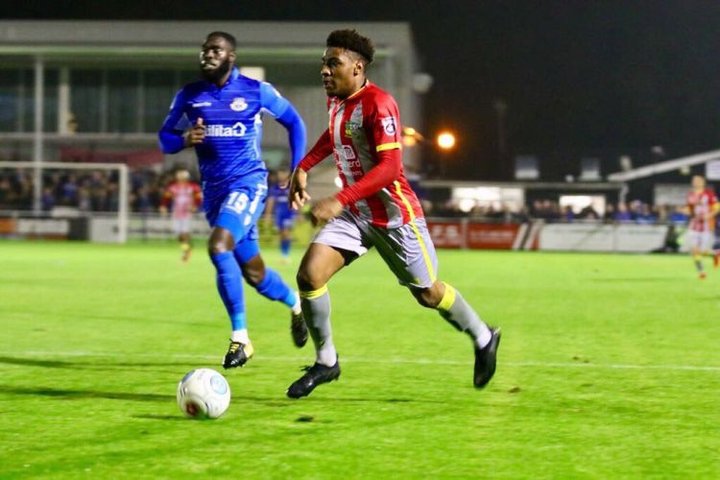 Macclesfield Town’s six-game unbeaten run came to an end on Tuesday night, as Dagenham & Redbridge earned a 1-0 win at The Chigwell Construction Stadium.

Morgan Ferrier grabbed the only goal of the game 5 minutes after half-time in a tight encounter and, despite the Silkmen pushing for a leveller, with Danny Whitaker going the closest to levelling, their winning run came to an end.

Ryan Bird gave the Whites the boost of an early 5th minute lead.

And he added his and Dover`s second in the 21st minute.

Joe Ward reduced the deficit 8 minutes into the second half.

But Manny Parry restored Dover`s two-goal advantage just a couple of minutes later – and they held onto that.

AFC Fylde may be in eighteenth place, but they seem to have the indian sign on third-placed Wrexham after winning 2-0 at Mill Farm.

The Coasters knocked the Dragons out of the Emirates FA Cup recently and dented their promotion hopes on Tuesday.

Goals from Jonny Smith after just 8 minutes and then Jack Muldoon in the 77th minute ended Wrexham`s unbeaten league run.

Sutton United missed the chance to move into third place when they were pegged back by a Aldershot Town at the EBB Stadium.

Craig Dundas headed Sutton back in front on the half-hour mark.

But a Scott Rendell penalty just before half-time drew The Shots back on level terms.

There were no more goals in the second period, which leaves the U`s in fourth place and The Shots in sixth, two points behind.

But Adrian Clifton pulled the Magpies level in the 17th minute.

Josh Rees equalised 2 minutes later, but a penalty from Harry Pritchard and a second for Clifton helped the visitors come out on top in a frantic match.

And Bromley`s frustration boiled over in stoppage time as sub George Porter was sent-off for a second bookable offence.

Maidstone United slipped into tenth spot after a good 2-0 win at The Shay against an FC Halifax Town side who started the evening in front of the Stones in the table.

And the Stones added a crucial second just past the hour-mark from Jai Reason.

Hartlepool United played out an entertaining 1-1 draw with Tranmere Rovers at Victoria Park.

After a goalless first half in which Pools had the better of the game, they
started the second half strongly and were 1-0 up inside the first 5 minutes.

Rhys Oates was fouled 30 yards out and Nicky Deverdics stepped up to fire an unstoppable free-kick past the helpless Scott Davies.

After dominating the opening 10 minutes of the half, Tranmere fought back to get back on level terms on 57 minutes when sub Jay McEeveley met a corner to power a header past Scott Loach.

There were some nervy final minutes as the visitors went close to winning the game, but in the end the points were shared.

Leyton Orient dropped to nineteenth in the table after going down 2-0 at the Matchroom Stadium to Gateshead – the O`s second successive home league defeat.

Jordan Burrow proved to be the visitors` hero, heading them into a 9th minute lead, before netting his second 10 minutes from time to seal victory for the Heed.

Chester FC halted a run of four games without a win with a last-gasp victory at the Swansway Chester Stadium against Barrow AFC, who have now dropped below them into third-bottom spot.

Chester raced into a 2-0 lead new signing Jordan Archer opened the scoring on 11 minutes and Reece Hall-Johnson fired home a second on 25 minutes.

But two goals in first half injury-time by Adi Yussuf and Byron Harrison had the Bluebirds level at the break.

That could have knocked the stuffing out of Chester, but they kept their shape and commitment and were rewarded 4 minutes into stoppage time when Lucas Dawson fired home from the edge of the box to earn a tremendous win for Marcus Bignot’s side.

Fourth-bottom Guiseley AFC were held to their eighth draw of the season at Nethermoor.

This time it was something of a bore draw against Boreham Wood, who would have moved into the top seven with a win.

Another of the strugglers, Torquay United, achieved a second win of the season to date, impressively beating mid-table Ebbsfleet United at Stonebridge Road.

It was something of a disappointing opening 45 minutes for the 1,525 crowd.

However, the second half opened up and became an entertaining encounter.

But there was only one goal, and that arrived just past the hour-mark when Torquay`s Jamie Reid’s curling 20-yard effort beat Nathan Ashmore in the Fleet goal.

It eventually earned the Gulls their first away win of the season.

It was a good night for the struggling teams as bottom-markers Solihull Moors also recorded a fine away win to move level on points with Torquay.

Moors won 2-1 at the Silverlake Stadium to bring a first win for new boss Richard Money.

With late signing Nick Towsend making his debut in goal, Solihull had a great start when Jermaine Hylton put them in front after just 4 minutes.

And 11 minutes into the second half, Oladapo Afolayan doubled the visitors advantage.

A neat Ben Williamson finish reduced the deficit just 3 minutes later, but Moors held firm to match Torquay on the night with their first win on the road.