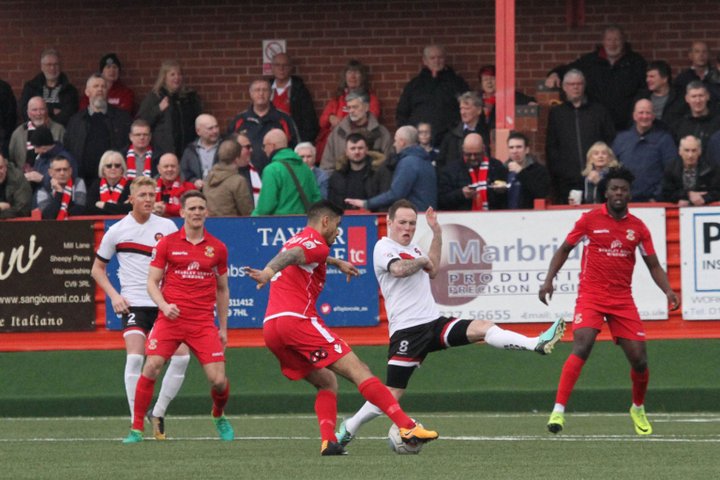 Mike Fowler says he wants to remain as Tamworth’s manager following relegation but admits there will need to be plenty of changes made going forward.

The Lambs’ relegation from the National League North was confirmed on Saturday thanks to the 4-3 home defeat to Chorley.

Tamworth led 3-1 with half an hour to go but they couldn’t take their survival hunt to the final day of the season following the Magpies’ fightback.

They will kick off next season at Step 3 and Fowler didn’t hold back with his comments following the game.

“It hurts, it hurts me a lot. The players are soft. There have been too many errors, too many blaming mistakes from referees and there’s not enough spirit in there to rectify problems in a game.

“The lads can’t score goals and defend, they can’t do everything together. Today isn’t the reason we’ve gone down, they’re just not good enough as a group.

“I can look myself in the mirror and say I’ve given everything and I don’t think there are half of the players that can say the same.

“How many of them are going to knock on my door and ask to stay at this club and take it back to where it deserves to be? How many have got the guts to stay and fight for this club? I’d say you could count them on one hand.”

Despite the big disappointment, Fowler hopes he is part of the club’s plans for next season.

“The buck stops with me and I’ll take that responsibility,” Fowler added. “The fact that we’ve been relegated I take very personally.

“There has got to be a clear-out. Hopefully, I’m not part of it because I feel I can take the club back up.”

 Saunders Has Mixed Emotions But Stones Stay Up Maidstone United boss Jay Saunders says guaranteeing survival was a good feeling, while he knows this season has seen plenty of ups and downs.

Team Of The Weekend: The National League  We witnessed a weekend of high emotion and mixed emotions. The penultimate weekend of the National league season drew contrasting feelings.