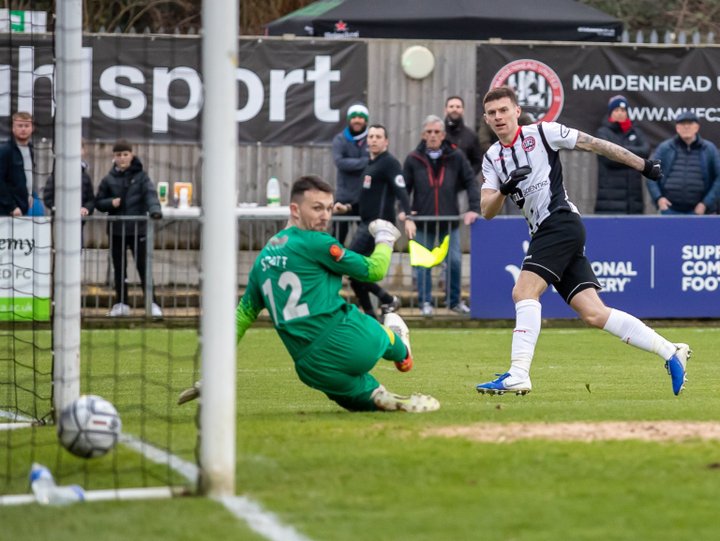 There were plenty of surprise results on Saturday on an afternoon when the promotion race took a twist.

Chesterfield are back on top of the Vanarama National League even after dropping two points in a goalless home draw with Aldershot Town.

That’s because leaders FC Halifax Town went down to Josh Kelly’s winner at Maidenhead United, just like the Spireites did on Tuesday.

Stockport County are on a roll and they got the job done early in the live BT Sport game.

They beat Dagenham 2-0 in front of the cameras, Ash Palmer’s header and a Will Collar goal - both inside the first five minutes - secured Dave Challinor’s team a fifth win in a row.

County are now just two points off the top and are in red-hot form.

Bromley can’t be discounted - their bold 2-1 win at Grimsby Town with earned by Jude Athurs seven minutes from the end.

Wrexham came from behind to defeat Yeovil Town 2-1, Paul Mullin on the scoresheet.

They player of the day was without doubt Andrew Dallas.

His scored five as Solihull Moors whacked winless Dover Athletic 5-0 and he now has eight goals in a week.

Inih Effiong was back on the scoresheet as Woking bettered Wealdstone, it ended 2-0.

In the National League South, Dorking Wanderers sent out a message to the others.

Marc White’s team not only won their eighth game on the bounce but they did it by thrashing second place Ebbsfleet United 5-1.

Maidstone United go second but they were held to a 0-0 draw at St Albans City.

Gateshead go three points clear at the top as Macauley Langstaff got two goals as they beat Leamington 3-1.

But Brackley Town dropped points as they drew 0-0 with Chorley.

Southport made it 13 games unbeaten with a 1-0 win at Gloucester City, Connor Woods got the winner.

County And Daggers Look Sharp Ahead Of Big BT Sport Clash  There’s nothing better for the neutral than when two very much in-form teams collide live on TV.