Chairman to Stand Down After National League Promotion Final 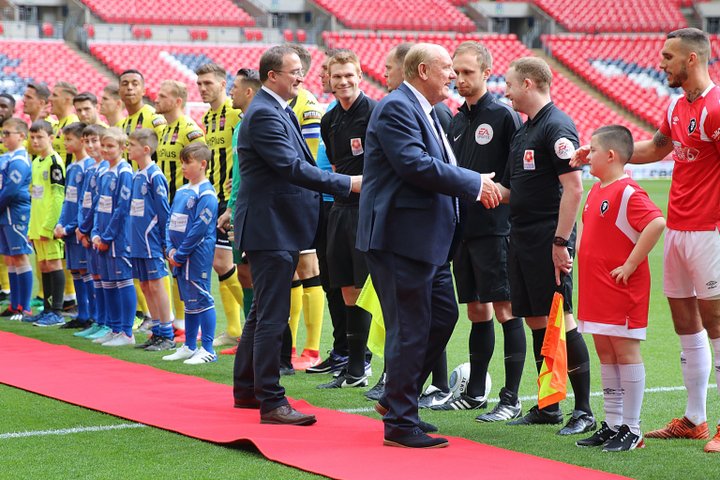 Chairman of The National League, Brian Barwick OBE, is to undertake his final duty in the role at today's Promotion Final.

Ahead of this afternoon, the Chairman produced the following notes for the matchday programme:

It promises to be an absolute cracker of a match with the much-valued prize of a place in the EFL for the winning club. Both of our finalists have long histories in that competition and will be hoping they are part of it again by the end of the afternoon.

Of course, firstly we should congratulate Sutton United for already being bound for the EFL as our Champions. They deserved their success and we wish them well in their exciting new adventure.

And who will join them? This season’s play-off matches have underlined again the success of extending them to 7th place. It not only keeps more clubs’ campaigns alive deep into the season but throws up some outstanding games with many dramatic twists and turns.

We thank Bristol City Football Club for playing hosts to today’s Promotion Final. Ashton Gate has been re-constructed in recent times and will provide a perfect stage for this crucial match. As you are aware our normal home for the event, Wembley Stadium, is currently hosting matches from Euro 2020.

Both finalists received just over 3,000 tickets each for the Final and we know they were eagerly sought after by the two clubs’ fans. I believe Hartlepool to Bristol is something in the region of a 600 mile return journey, whilst Torquay fans will be travelling around 200 miles there and back to witness the big occasion.

So thank you for making an effort to be with us today – one thing has become clear football matches played without fans in the stadium aren’t the same.

It will be great to hear both sets of supporters in good voice. These have been incredibly difficult times for the country as a whole and sport has not been spared either.

At our level, it has asked a tremendous lot of the clubs themselves and the central framework around our three divisions. It has been challenging for all those involved. And I thank everybody for their dedication and determination in these trying times.

Hartlepool United come here after beating Bromley and Stockport County in their two play-off matches. Their coach, Dave Challinor, has experience of the Promotion Final and will make sure his team are primed and ready to go right from the kick-off. He will hope his star-striker Rhys Oates maintains his scoring streak – and that Hartlepool will win their first promotion at any level since 2007.

Torquay United have a man who knows his way around Ashton Gate in manager, Gary Johnson. A vastly experienced football man, chasing his seventh promotion as a manager, Gary extended his contract with the Gulls shortly before his team beat Notts County to reach his old stamping ground where the boss for five seasons. His team finished 2ndat the end of the regular season.

Good luck to both teams. We know it will be a very tense affair for both clubs but it provides a tremendous climax to the season.

I would like to thank Vanarama for their continuing sponsorship of our competition – and indeed extending that partnership for a further three years in the midst of the pandemic . It showed great loyalty and the confidence they have in The National League.

BT Sport have also extended their deal with us for a further three years, another sign of the increasing profile and stature of the competition. As a former TV executive I feel qualified to express my appreciation for the standard of their live coverage of our matches – and the comprehensive highlights programme that follows on from the games themselves.

We should also acknowledge the financial support we receive from other partners and the Premier League, and the hard work and guidance we receive from the Football Association. The exceptional injection of £10m from the National Lottery, through Camelot, also was deeply appreciated.

Today our Guests of Honour will be two NHS nurses, one representing each club, in our small way of thanking them, and the thousands of NHS and other emergency service workers, and those working in essential services, for their unstinting dedication and duty over the past unprecedented eighteen months.

Finally, I would like to thank everybody who has made my time as Chairman of the National League so very memorable. This is my final duty today. It has been a privilege to be part of it all for the past six years and I wish the competition and all our clubs across its three divisions, a positive and progressive future.

Enjoy today – and stay safe. And may the best team win.