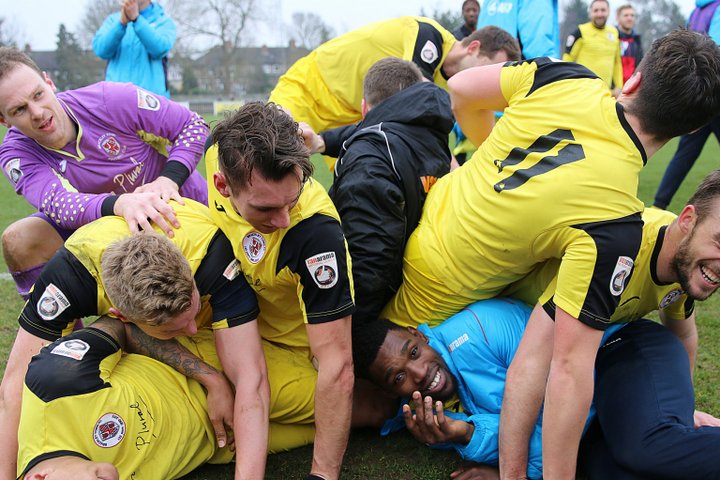 Veteran keeper Danny Lewis is determined to add another promotion to his CV - he’s had enough mid-table finishes to last him a lifetime!

The ex-Kidderminster stopper is one of the key reasons the Saints will today be competing for a place in next season’s National League.

Lewis made a number of fine saves to deny Bradford Park Avenue in last weekend’s semi-final, including a miraculous stop with his foot deep into extra time.

And he’s desperate to emulate his achievement with Solihull Moors back in 2016 - his first promotion - before the Saints' visit to Wembley in the FA Trophy final next weekend.

He said: “You know that these opportunities are few and far between. You work hard all season and then it all comes down to one game. You can’t let it pass you by because you can’t be sure when you’ll be involved in something like this again.

“My only promotion was a couple of seasons ago with Solihull. For the first 12 or so years of my career there was nothing to speak of - just constant mid-table finishes!

“You take the big games for granted at times. Football is all about experiencing those highs because they’re fantastic when they come.

“The win against Bradford on Sunday was great to be a part of and we’ve got another huge one coming up against Harrogate that we’re all looking forward to.”

Read the full 900-word feature with the Brackley keeper in the National League North Promotion Final Programme - on sale inside the CNG Stadium today.

 Mellon: 'Incredible' Tranmere Are Back Where They Belong Tranmere Rovers boss Micky Mellon says their promotion final win is up there with the proudest moments in his career.

Dowson Knows Stage Is Set For Beavers  No-one would have had a Hampton vs Braintree final in their heads this time a week ago. What with the form of Dartford and of Chelmsford City going into the last Sunday’s semi-finals.