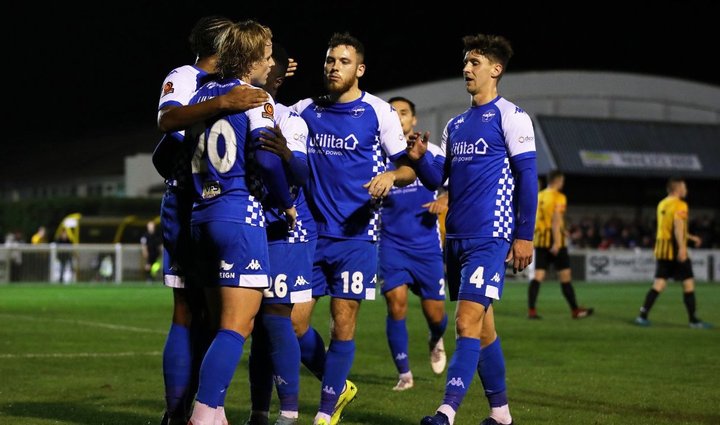 Nine National League sides have progressed to the FA Cup First Round after an intriguing night of FA Cup replay action.

Notts County were the big winners of the evening, putting four past Tamworth at Meadow Lane.

Three goals in the space of ten early second-half minutes guided the Magpies to a convincing victory, with a trip to Rochdale the reward on the weekend of November 6th.

Joining Ian Burchnall's side in Round One will be fellow fifth-tier side Wrexham, scoring either side of the interval to brush aside last year's cup heroes Marine.

A tense derby battle between Weymouth and Yeovil Town went the distance at the Bob Lucas Stadium.

An extra-time strike from Ben House proved to be the difference for Eastleigh (pictured) in overcoming the tough task of toppling Folkestone Invicta.

FC Halifax Town's progression did not require an additional half hour as Pontefract Collieries were beaten by a solitary goal at the Shay.

A single goal defeat of a Step Four outfit also saw Gateshead negotiate their route into the First Round, where the Heed will participate for the fourth time in five campaigns.

St Albans City go marching into the next round after a late penalty shootout win over Corinthian Casuals, which followed a delayed kick-off at Clarence Park.

Dover Athletic will be required to travel again to Yate Town after their clash in Gloucestershire was abandoned due to floodlight failure.

Elsewhere, Boston United, Kettering Town and Dorking Wanderers all bowed out of the competition.

One more National League will be guaranteed to join those already in the First Round as South division outfit Havant & Waterlooville host Torquay United Wednesday night.

Curzon Opt To Cull Cunningham As Nash Make A Change  Curzon Ashton have confirmed that they have decided to part company with manager Steve Cunningham.