What Happened In The National League And FA Cup? 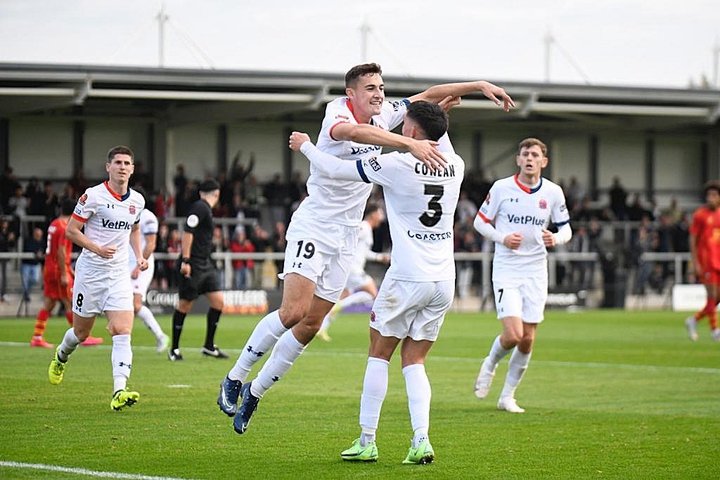 The FA Cup may have taken the focus for many but there was plenty of National League action as well.

There are new leaders in the National League North but they were made to work for it.

AFC Fylde are back on top after they overcame Gloucester City 1-0.

Joe Piggott’s winner on the stroke of half time did the damage - and they held firm to take advance of Brackley Town’s FA Cup game.

Chorley are now fifth after a 2-1 victory over Darlington.

Jacob Blyth was the hero nine minutes from the end as they enhanced their promotion chances.

AFC Telford United gave themselves a big boost with a 2-0 win against Farsley Celtic. Elliott Durrell made it safe.

In the National League South, Peter Taylor is getting his feet under the table at Welling United.

The Wings made it two wins from two after seeing off Braintree Town.

Billericay Town are also firing under their new manager.

Boreham Wood keep on winning - they are in the hunt on both fronts, they beat Barnet thanks to a Will Evans goal.

Angelo Balanta was the hero for ten man Dagenham as they won 2-1 at Wealdstone.

There was more to celebrate for Grimsby Town fans, comfortable 5-0 winners over Bromsgrove Sporting.

It’s the same story for Chesterfield, who avoided an upset as they won 4-0 at Curzon Ashton.

Eastleigh staged a remarkable three-goal comeback to take Folkestone Invicta to a replay.

Torquay and Havant & Waterlooville played out a 2-2 thriller - they go again in Hampshire after a brilliant Plainmoor match.

Wrexham needed a very late Jordan Davies goal to keep them in the FA Cup - he levelled four minutes into injury time at Marine.

Notts County need another go, they were held 0-0 at Tamworth.

Weymouth bit back to take Yeovil Town to a replay while Stockport County, Southend United and Maidenhead United all progressed comfortably.

 The Draw For The FA Cup First Round Has Been Made The draw for the first round of this season’s FA Cup has taken place as excitement builds.

Who Will Make The Big FA Cup Headlines This Time Around?  The National League hunters are joining the FA Cup pack but must avoid becoming entrapped before they really get going.