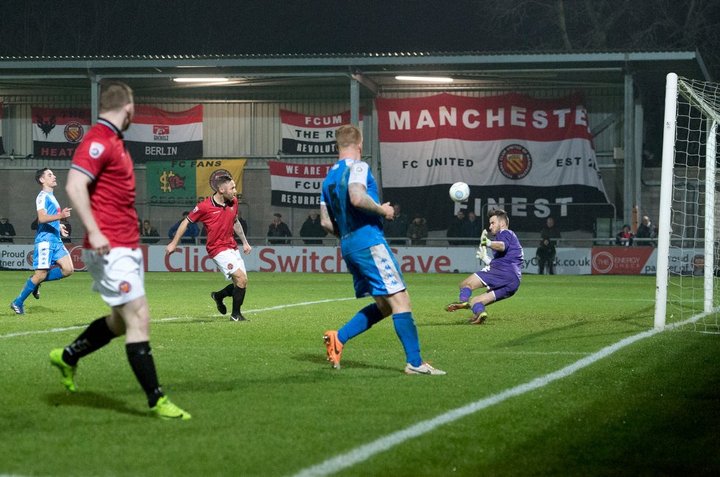 It was another dramatic weekend in the National League North, but which players stood out for us? You can find out here.

Our team select a starting XI as well as the substitutes - you always need a strong bench and our side is no different! Writes Tom Feaheny.

We’re creating a dream team from each of the National League divisions so everyone can keep tabs on the progress of the players across all three leagues.

It was a brilliant weekend of action in the National League North so here’s our squad who deserve recognition for their efforts and we tell you why they’ve made the cut.

Agree? Disagree? Join the debate on twitter and make sure you’re following @TheNationalLge

First of all there has been a change in formation as we go for a 4-3-3, this is down simply to the fact that three strikers forced their way into the side after some fine performances

Goalkeeper: Max Crocombe (Salford City)
A clean sheet away from home for the league leaders keepers, who when called upon during the match made a number of saves.

Defence: James Clifton (Boston United)
An impressive display at full-back helped the Pilgrims to their first win with Craig Elliott in charge with Clifton getting an assist as well.

Defence: Andy Teague (Chorley)
The defender helped his side to a clean sheet by stopping a certain goal at one end and before that had scored at the other helping Matt Jansen's side to victory.

Defence: Fraser Horsfall (Kidderminster Harriers)
Another defender with an eye for goal as his strike helped the Harriers into the play-off places, that along side a number of good attacking runs, he helped them to a clean sheet as well.

Defence: Shane Byrne (Brackley Town)
Byrne had a big say on this game, with his goal opening the scoring, he was then key to them getting the win with a big defensive display.

Midfield: Oli Johnson (Bradford Park Avenue)
Mark Bower's side keep on performing and picking up results with Johnson once again being key to their victory he not only scored but created several chances during the game.

Midfield: Declan Weeks (Kidderminster Harriers)
After scoring his first goal for the club and making a real impact in midfield, this fine display saw him gain plenty of accolades from the club this weekend and he is now in our starting 11 as well.

Midfield: Callum Powell (Tamworth)
An unlikely comeback for Tamworth from a losing position was secured with Powell impressing down the wing, two assists and a performance of real quality ensured Powell got selected.

Striker: Jason Gilchrist (Southport)
The young striker is learning off his manager Kevin Davies, he arrived after a fine spell at FC United of Manchester and has impressed so far, with his hat-trick not being enough for the side to gain victory, this was still his best performance for his new side.

Striker: Aaron Williams (Brackley Town)
Two goals and a big performance from the forward ensured Brackley gained victory and kept up their push for promotion.

Striker: Tom Greaves (FC United of Manchester)
The manager made FC United history by becoming their record goal scorer, his two strikes not only reached him to 100 goals for the club but also ensured they gained victory against one of the favourites for promotion, a good day indeed for Greaves.

 WATCH NOW! Highlights From Saturday's National League Games The Vanarama National League season is reaching the half-way point, with fixtures across our three divisions played yesterday - and you can catch the best of the action right now.

Five Things We Learned From This Weekend...  It was yet another action-packed weekend of action across our three divisions whilst some of our clubs were flying the National League flag in the FA Cup, writes Steven Coney.