Liddle Lifts The Lid On His Penalty Kick Final Relief! 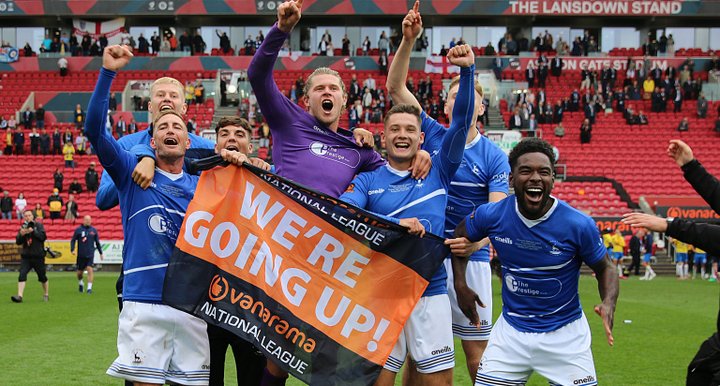 Gary Liddle had more reason than anyone to ambush Hartlepool hero Brad James on Sunday.

The veteran centre-half was next in line for a penalty kick - and that put the fear of god into the defender!

His leap on goalkeeper James after he pushed Matt Buse’s spot kick onto the bar said so much for the 35-year-old.

He came to the club as a young midfielder, and even helped the club earn automatic promotion to League One back in 2007.

It’s all changed since then, but one thing remains.

He is still winning awards, and was named the Vanarama Man of the Match against Torquay United in the Promotion Final.

Things could have been very different but the beers were on Brad - literally - after saving him from that long walk in the shoot-out.

It could have all been too much, especially after his admission after that the game’s other keeper had left him shaken.

Lucas Covolan scored a 95th minute equaliser to force extra-time and then, of course, the penalties.

Liddle confessed: “At that time, and I don’t mind saying it, mentally I was gone.

“We didn’t think the game was won when he scored, but it felt so close. It was ripped away from us.

“We felt down, we had tens of thousands of fans back home and we didn’t want to throw it away.

“I felt that if we didn’t win that we may not have been able to keep this team together. It may have slipped away from us.

“We tried to attack in extra time - we tried to win the game but we took penalties and we found a way.”

He added: “I was the next penalty taker and I’ll be honest after the event, I really, really didn’t want it.”

Liddle says it’s been a tough time outside the EFL for Pools.

He agrees that the club owe so much to manager Dave Challinor - a man who buried his own dark play-off past at Ashton Gate.

“It’s been a long time for us, it’s been eight years,” Liddle said.

“All these games later I have another promotion. It feels sweeter than the first time for sure.

“It’s been a long season but we kept going and kept going.

“The manager deserves it - he has past experience with the play-offs and it hasn’t gone well for him.

“More than anything he deserves it. I’m just so chuffed for the fans too - you saw what it meant to them.”

Fixtures Release Day Confirmed for 2021/22 Season!  National League fixtures scheduled for the 2021/22 season will be released on Wednesday 7th July at 1pm.