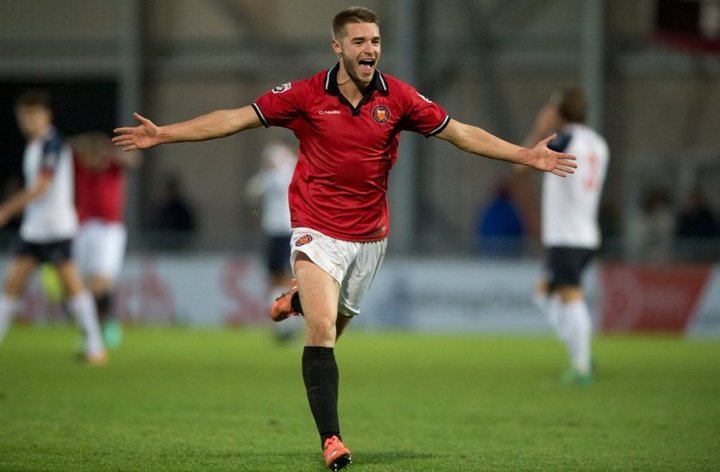 Gilchrist, 22, has scored 7 goals in the last five matches for FC United to bring his club goalscoring record to 29 from sixty-two games.

Gilchrist follows Nathan Lowe as the second contracted player to leave the club to sign for Southport this season.

In addition to the fees paid to capture Gilchrist and Lowe, FC United could benefit in the future with a selling on clause built into the deal between the clubs.

FC United`s player/caretaker-manager Tom Greaves told his club`s official website: “Gilly has been magnificent for us this season. He’s a hard-working lad who always gives his all to the shirt. It’s been a pleasure to play alongside him in recent weeks and I’ve no doubt that he’ll go on to great things.”

FC United CEO Damian Chadwick added: “As a club we want to see young players flourish, but when another club is willing to pay a significant sum of money for our players, we have to do what is best for both the club and the player. In the case of Lowe and Gilchrist, we simply could not turn these offers down.

“On behalf of everyone at the club, we would like to wish Jason all the very best in the future. He has played a crucial role for us since joining us at the beginning of the 2016/17 season and especially in recent weeks with some top-quality strikes. We’d like to thank Southport for working with us to agree a deal that is of benefit to all parties.”

Born in St Helens, Gilchrist joined Manchester City in 2001 at the age of six.

He spent ten years at the club and was top scorer in six of those seasons.

He failed to earn a scholarship with Manchester City and in the summer of 2011, he joined Burnley on a two-year scholarship.

In March 2013 he experienced his first taste of senior football joining then-Conference (National League) North side Droylsden on loan until the end of the season, where he made ten appearances for the Bloods scoring once.

In the summer of 2013, following the conclusion of his scholarship, he was offered a one-year professional contract with the Burnley.

He spent the majority of his first two years as a professional playing in the development squad, and in February 2015 he signed for League Two side Accrington Stanley on loan, where he made his League debut in a 3–0 away defeat to Burton Albion.

In January 2016, he was sent out on loan to National League side Chester FC on a one-month loan deal but in April 2016, it was announced that he was to leave Burnley at the end of the season.

Gilchrist joined the FC United in the summer of 2016.