The Friday Feature: Dean Brennan's Hemel Hit Form, But We Ain't Seen Nothing Yet 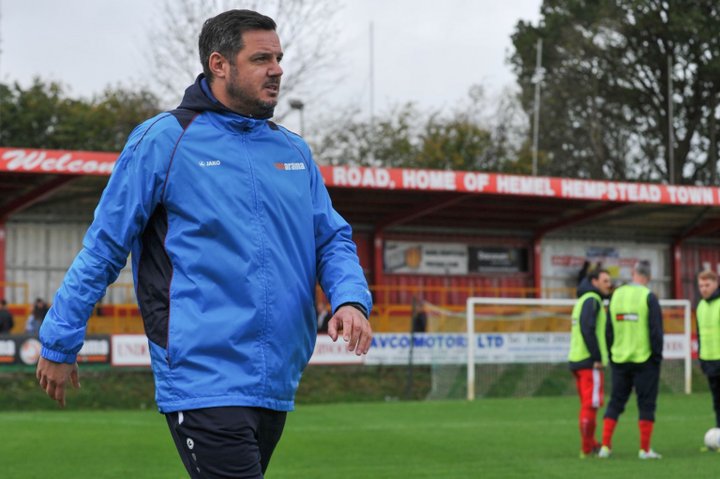 Dean Brennan had a warning for the rest of the Vanarama National League South when we sat down with him this week: Hemel haven’t really got going yet.

The Tudors are up to third in the table following three back-to-back wins.

Inflicting just East Thurrock’s second defeat of the season on them last weekend at Rookery Hill, it was the club’s third clean sheet in a row to boot. They are coming up on the inside and trying to get their noses in front.

But with injury problems clearing up and players finding their form, could we be seeing a new challenger appear?

“I don’t know about that,” Brennan said when we spoke to him. “Everyone knows how it’s been this season in the National League South but the great thing for us is that we are finding our feet at a good time.

“We are now going into a period when games are slowing down - we haven’t got a midweek match in November. It’s settling down, and we would love to be up there but I’m not saying will be.

“What I will say is that I don’t think we have fully got going yet. I think we’ve not yet shown what we are capable of. I can see us ready to do even more.

“I have only had one centre forward fit for most of the season. We have been a little makeshift but we aren’t too far from the top. Let’s see what the next few months brings.”

Challengers? Well there’s something to be said for an unknown quantity.

“We’re happy not to be talked about, we’ll leave people to bring up Chelmsford and Dartford!” Irishman Brennan laughed.

“It’s a very, very tight league. I think we just need to keep players fit, especially the more experienced ones. They are very good pros..

“I think we will see things keep chopping and changing because it’s that sort of division.

“Our players are enjoying it, they’ve got their smiles back and it’s a good dressing room to be a part of right now.”

It will be a quiet one at Vauxhall Road on Saturday. There’s no game this weekend because of Chelmsford’s FA Cup commitments, and after nine points from nine surely that’s a negative?

“No, not at all,” the manager said. “We’re glad of the rest and the chance to get a few players who are a little sore 100 per cent again.

“Not that we wouldn’t be confident, but it’s not a bad time to sit back, reflect and see where we are as a club.

“It’s been a great few weeks for us. We set ourselves a points target before a ball was kicked and if we achieve that, we’ll have a very successful season.”

 Garrard: Boreham Wood Belief Will Be Key To Cup Shock Boreham Wood boss Luke Garrard says the confidence in the side will be crucial if they are to defeat Blackpool.