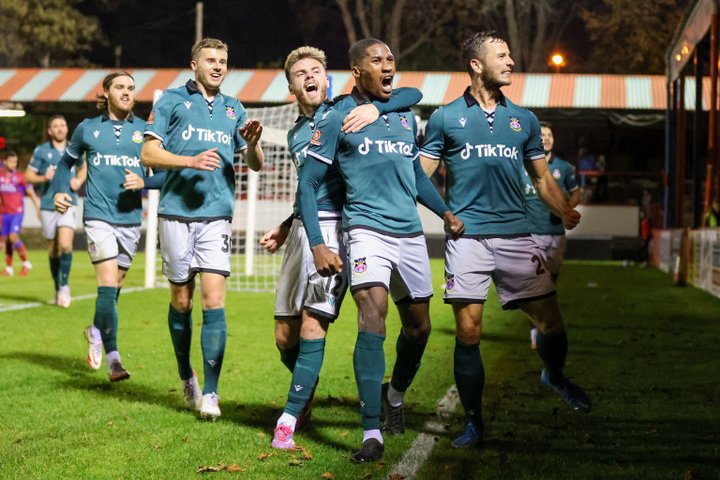 Wrexham were the big winners on another intriguing evening of action across the Vanarama National League, with five matches taking place.

After the initial clash with Aldershot Town was abandoned due to a waterlogged pitch, Phil Parkinson's men made a big splash on their return to Hampshire!

In the only midweek fifth-tier clash, the Reds found the target five times on a red-hot night in front of goal at The EBB Stadium.

Wrexham move into the top ten with victory, while Mark Molesley's Aldershot suffer their seventh straight home league defeat of the campaign.

Away wins were also the order of the day in Vanarama National League South, where both Havant & Waterlooville and Hemel Hempstead Town were rewarded for Tuesday night road trips.

Marksman James Roberts proved to be the difference against Tonbridge Angels for Havant as the Hawks fly up the standings and into the play-off places.

Under new boss Mark Jones, Hemel Hempstead are starting to gain the results to back up their improved performances.

After a worthy point versus in-form Dorking Wanderers on Saturday, the Tudors had Gus Scott-Morris to thank for a second-half winner to ease their relegation worries at Hungerford Town.

The opposite end of the table was where sights were set in the North division as Brackley Town went level on points with AFC Fylde at the top with a 2-0 win over Spennymoor Town.

Leamington love being seen as the underdog but, after victory over York City and rising up into fourth, it may not be a tag they can hold on to for too much longer!

The former U23 and U18 coach had taken interim charge since the departure of long-serving Adam Lakeland, who has joined North rivals Curzon Ashton.

Ross' first match as the permanent man in the Celts' dugout takes place at Gloucester City on Saturday.

What's Ahead Across The National League This Evening  With FA Cup dreams shelved for another season for some, it's back to the bread and butter of league football on Tuesday night.