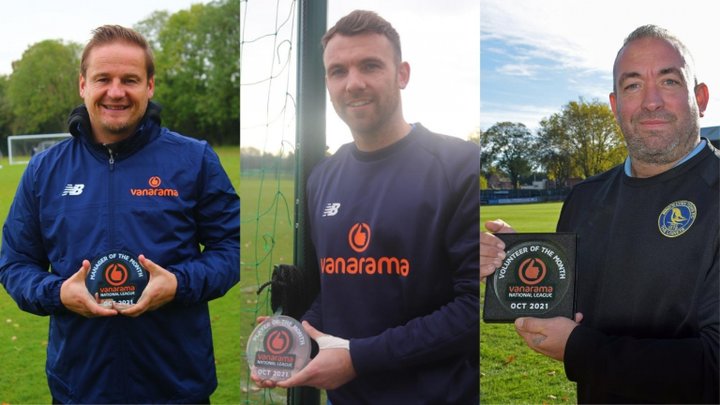 October is usually the month when we see the cream start to rise to the top - so it’s about time we honoured those who really started stirring!

We’re delighted to present the National League’s Manager, Player and the Vanarama Volunteer of the Month to you as the season really starts to take shape.

Neal Ardley was the first to admit he didn’t know quite what to expect heading into the new campaign.

What he did know was that he had to make Solihull Moors hard to beat again - and he is already making his mark.

They ended September with a 5-1 hammering at Dagenham ringing in their ears and it may prove to be the hard-to-digest moment that transforms their season.

Since then, Ardley’s team haven’t looked back - and five wins from their seven games, with the other two well-earned goalless draws - underlines their improvement.

Victories against Southend United, King’s Lynn Town, FC Halifax and Altrincham means nobody wants to play them at the moment and Ardley is the month’s top boss.

Moors have October’s Player of the Month, too.

Ryan Boot has been a backline bedrock and the goalkeeper has been feeling indescribable lately.

In 630 minutes, he had conceded just one goal - after Saturday’s excellent FA Cup draw at Wigan Athletic, you can make that 720!

The golden glovesman is worth his weight and aged 26, we surely haven’t seen the best of him yet.

Stuart Gallon gives King's Lynn Town and their young stars of the future everything he’s got and that’s why he is so well respected at The Walks.

Helping the under-13s flourish, he also lends the first team a hand - organising the youngsters for ball boy duties, making sure they’re in the right place at the right time.

His energy and encouragement keeps them coming back while they learn new skills and feel a big part of their club.

Stuart also makes sure the social side is strong, organising presentation evenings and events for the children to enjoy and build friendships.

Well done to our trio of fantastic winners!