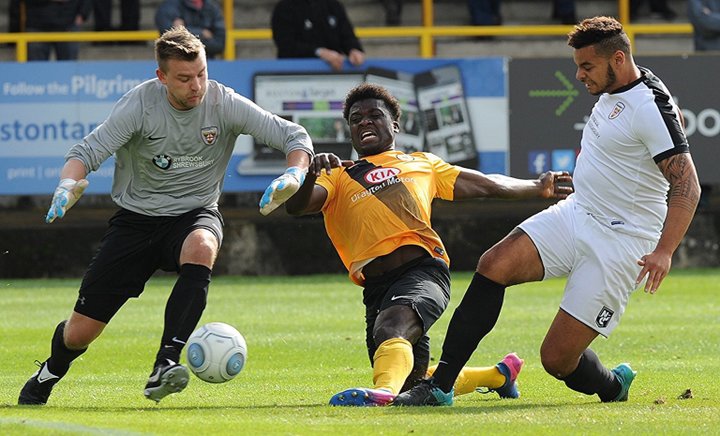 Was it really so long ago that the medals were being dished out on the pitch and the champagne corks were flying in changing rooms?

One thing is for sure, it’s going to be another eventful season in a division littered with big clubs and big crowds.

Here’s our club-by-club guide with how they fared last time out, and what they’ll be hoping to do when it all kicks off again in August.

AFC Telford United
(National League North: 14th)
New manager, new hope. Bucks fans will hope they can play a part at the other end of the National League North next season. Gavin Cowan is going about his business well. Dom Smith is a fine addition, and Andre Brown could do some damage.

Alfreton Town
(National League North: 17th)
The wind of change has blown through the Impact Arena. Not so much wind, it's 15 new faces. New boss Billy Heath brings with him fresh ideas - and plenty of signings. He has managed many of them before and trusts the ones he is bringing in.

Altrincham
(Evo-Stik Premier: 1st)
Back after just a year, Alty believe relegation has made them stronger. Phil Parkinson has produced a quick and passionate team, easy-on-the-eye and one who may fancy another dabble at promotion. He says they aren't there to make up the numbers.

Ashton United
(Evo-Stik NPL Premier play-off winners)
They could be next season’s mystery package - and they wouldn’t have it any other way. Going under the radar is the perfect way to handle the step up and Jody Banim has a squad full of grafters.


Boston United
(National League North: 9th)
Some good signings have got the fans talking. Nathan Arnold, John McCombe and Adam Marriott bring quality in every area of the field. Craig Elliott has an exciting squad

Blyth Spartans
(National League North: 10th)
Comfortable last season, and even failure to make the play-offs when it looked on for so long wouldn’t have frustrated fans too much. They probably weren’t ready to go up but the experience will help.

Brackley Town
(National League North: 3rd)
The loss of top scorer Aaron Williams will be felt, but with many of their FA Trophy winners vowing to return there’s no reason why the Saints can’t challenge again. Can Kevin Wilkin fill the goalscoring void?

Bradford (Park Avenue) AFC
(National League North: 7th)
New name, new badge and the great news… same manager. Mark Bower will take the team again next season after beating the odds to get into the play-offs.

Chester
(National League: 23rd)
What next for both club and new managers? Both have had highs and lows over the past few years but it’s certainly a big season for Chester and the pairing of Anthony Johnson and Bernard Morley after their Salford City exit.

Chorley
(National League North: 6th)
It's all change - but how will the mid-close season drama effect them? Matt Jansen left all of a sudden, and coming in Jamie Vermiglio has a job on to follow in his foot-steps. But the Magpies squad he has inherited is strong.

Curzon Ashton
(National League North: 18th)
John Flanagan will want more next season. Despite limited resources, he thinks his team are better than the side who hovered around the bottom three for so much of last term. Defenders Max Cartwright and Danny Morton should make them harder to beat.

Darlington
(National League North: 12th)
The Quakers fans will think they now have an attack to be reckoned with. Reece Styche and Simon Ainge will surely cause real damage, and with goalscoring midfielder Jordan Nicholson now on board they will be considered contenders.

FC United of Manchester
(National League North: 16th)
After a season which saw unheard of change at FC United, all eyes will be on player-boss Tom Greaves and how he tackles his first summer in charge. Can they build on a solid first season under the striker?

Guiseley
(National League: 24th)
How do you recover from a torrid season to challenge at the top the next? Marcus Bignot and Russ O’Neill must come up with some answers. They don’t some good deals so far and cleared the decks - quality over quantity is required.

Hereford
(Bostik Premier: 1st)
Three titles in a row, so can they make it four? Losing free-scoring John Mills won’t helping Peter Beadle’s rampaging Bulls but they have quality everywhere. The question is how big is the gap from the Southern League - and can they bridge it?

Leamington
(National League North: 19th)
Objective accomplished in season one. Safety was assured without a great struggle. Now Leamington want to take the next step. Paul Holleran must wheel-and-deal again but he knows the market well.

Nuneaton Borough
(National League North: 13th)
The announcement last month that the club are under new management surprised many. Gary Charles was out and Nicky Eaden would take his place. Filling the goals void left but Ashley Chambers is the biggest job.

Spennymoor Town
(National League North: 8th)
After just missing out on the play-offs in the first ever season in the division, Jason Ainsley will have eyes on going one better. So far so good - they’ve kept hold of their big names.

Stockport County
(National League North: 5th)
The early bookies favourites will have to do it without last year’s top performer Jimmy Ball and top scorer Jason Oswell. Captures including Nyal Bell, Ash Palmer and Jake Kirby, all giving fans belief this is their year.

York City
(National League North: 11th)
There pressure will be on to perform next season - missing out on the play-offs all together last time out what not expected. They will again be among the favourites and manager Martin Gray has said this weekend that their only goal is to win the National League North.

It's No Go For Hemel And Hitchin Tonight After Long Saga  Hemel Hempstead and Hitchin have been forced to admit defeat with their ill-fated match this week.