Wood You Believe It! Garrard's Dreaming Of Wembley Visit 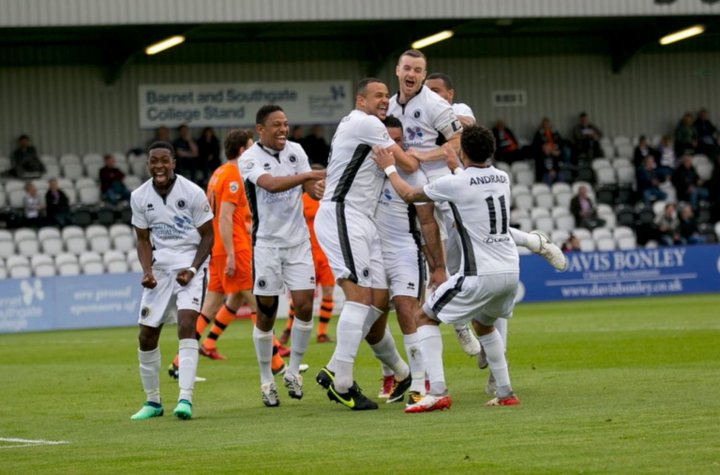 Luke Garrard knows there are plenty of similarities between Boreham Wood and Sutton United - but he hopes his side are the ones celebrating on Sunday.

Both clubs are trying to secure a Football League place for the first time in their history but for one, the dream will end.

Garrard’s Wood saw off AFC Fylde on Thursday night thanks to first-half goals from Jamie Turley and Bruno Andrade and now they travel to Gander Green Lane.

The winner will be playing at Wembley next weekend in the final against Tranmere Rovers - and Garrard is looking forward to battling for such a huge prize.

He told the National League’s Oli Osborn: “It’s going to be amazing. I love Dos (Sutton boss Paul Doswell) and he’s done a fantastic job down there.

“We’ve come up into the National League near enough together, we’ve consolidated together and one of us - who have been in the Ryman Leagues not so long ago - have a chance of going to Wembley.

“It’s a great achievement for both sets of teams and we’ll go there with the mindset of ‘we want to win’ - that is always our purpose.

“It’s going to be tough. Why? Because they’ve had a rest. We’ve got bodies with a few little niggles but we go there with the opportunity of fulfilling a dream and getting to Wembley.”

Beavers Believing As They Gear Up For Semi Shoot-Out  Hampton defender Josh Casey reckons his side being forced to go the distance on Wednesday could actually be an advantage in Sunday’s huge semi-final on Sunday.