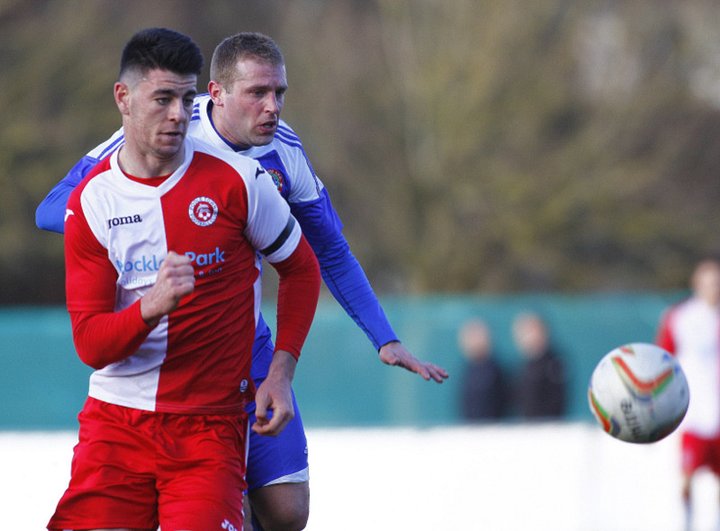 Boreham Wood have announced the signing of exciting young striker Joe Quigley on a long-term loan from Premier League side AFC Bournemouth.

A Republic of Ireland under-21 international, Quigley was recently with Newport County, making a number of Football League appearances.

Quigley made his international debut for Ireland during the 2019 UEFA European Under-21 Championship qualifiers, coming on as a substitute in a 3-1 win over Azerbaijan.

On the deal, an elated Quigley told the club`s press officer Craig Draycott: “I am glad to get it over the line and I am happy to be here. I got a call off Terry Harris and then Luke Garrard gave me a call, and I had a good chat with him.

“It sounded positive and it sounded like a club moving forward, so it was a no brainer.

“They have got a good squad, I knew some of them from my time at Woking, and they are on a great run. Obviously, there are a few draws in there, so hopefully I can come in and score some goals to turn them into wins.”

Quigley spent time on loan with fellow National League sides Torquay United, Wrexham and Woking prior to his stint with the Gills.

With the young Premier League forward having proven himself in both the Football League and the National League, the 21-year-old will be seen as a high-profile signing for the Wood.

Born in Hayes, Quigley has spent more than ten years with AFC Bournemouth, rising through the academy ranks.

He continued: “I have been at Torquay, and then I went over to Wrexham and I had a stint at Woking, so I know the league quite well.

“I am a good size, I am 6`4”, so I think that I can bring a good presence upfront, I like to get into the box and I like to score goals.

“I have come up through Bournemouth’s academy, and I have learnt a lot there and hopefully I can bring it all together.”

Wood chairman Danny Hunter said on the loan signing: “Joe was someone we’ve known about ever since his successful loan period at Woking and we’ve always liked him. We obviously needed a body or two through the door, as we’re now in a great position to sustain a challenge for the play-offs.

“With the recent loss of defender Dean Wells, we’ve also brought in Alex Davey from Torquay United to give us some squad strength defensively. And, we also have offers in at a number of clubs, so our signings are not over yet.

“My experience over the last nineteen seasons tells me, that it’s that time of the season where as a Chairman, I either back the situation I find myself in, and back my manager, or we could all look back in May and say if only. I don’t want me, Luke or this club saying if only, as we watch either the play off or Trophy finals at Wembley on our TV’s.

“So, I’ll find a few bob, ask Luke and Terry to be clever with my money in the transfer market, and let’s see where it takes the club, Luke and the dressing room? But for me, on our crowds, just to be challenging the likes of Macclesfield, Wrexham, Tranmere and Dagenham is exciting. And just being above the likes of Orient, Torquay and Hartlepool, shows how well this club is being managed”.

Super Saints Get Their Play-Off Push Back On Track  St Albans City moved to within a point of the National League South play-off places after completing the double over Chelmsford City.