What's In A Start? The Champions' First Month Assessed 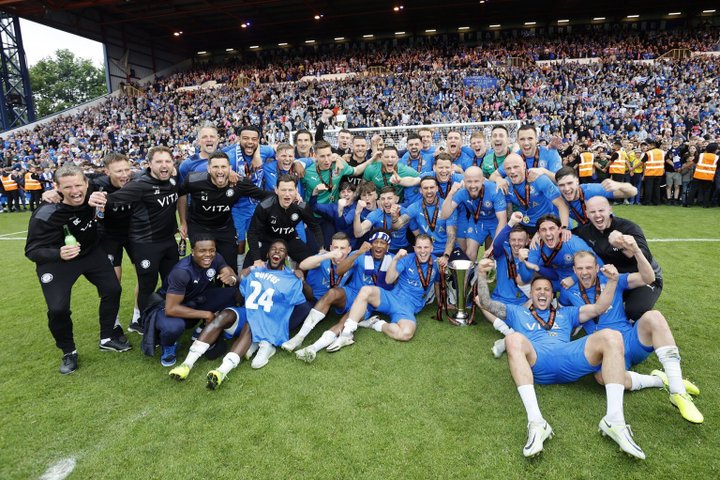 We know the fixtures are there's no doubt you're busy plotting how many points your side can take from the first few matches.

Things get back underway in just under two weeks so we’re assessing how important it is to spring out of the starting blocks.

Managers often speak about how important it can be to ‘get off to a good start’ or to ‘start as you mean to go on.’

The question is, however, how important is a good start in the National League?

We’ve looked at the last ten champions to see how they kicked off their seasons.

Stockport County (2021/22)
Three games. One win, one draw, one defeat. That’s how County started the season under Simon Rusk. He couldn’t arrest the inconsistency and ended September mired in mid-table.

In came Dave Challinor. Just one league defeat between his appointment to the latter stages in mid-April saw the Hatters edge title foes Wrexham on the final day.

Sutton United (2020/21)
Matt Gray’s side went under the radar to claim an unthinkable title – even when they were sitting pretty in second after the first month, most assumed they’d fall off.

Four wins and a defeat saw them begin what would prove to be a season-long tussle with Torquay United as the U’s were made to wait until the penultimate weekend to secure the title against Hartlepool United live on BT Sport.

Barrow (2019/20)
When the season got underway in 2019 nobody could predict how it would ultimately end – and we’re not just talking about the pandemic.

Ian Evatt’s side picked up two wins in their first eight games and ended August in the bottom four.

Things would pick up for the Bluebirds, inspired by John Rooney and Scott Quigley, they eventually claimed the title on points-per-game.

Leyton Orient (2018/19)
Orient claimed their silverware on the final day with a goalless draw against Braintree.

Draws was the story of how their season started too – with four of their opening seven games in August ending level.

After winning the other three, Justin Edinburgh’s side were unbeaten in the first month and sat fifth.

Macclesfield Town (2017/18)
The Silkmen finished the season as runaway champions, storming to the title with a clear, ten-point margin. But their season was a stuttering start.

Town won only one of their first five fixtures, before recovering towards the end of August.

Lincoln City (2016/17)
This season heralded a new dawn for the Imps. Danny Cowley was appointed their new manager and his side took 12 points from their opening six games.

Their opening day win against Woking was followed up with a resounding 6-1 win against North Ferriby before defeats to Sutton and Dagenham & Redbridge.

The Imps’ form then picked up into mid-September as they went on a five game unbeaten run.

Cheltenham Town (2015/16)
Cheltenham were quick off the line during the opening month of their title winning campaign.

The Robins went unbeaten through August, taking 15 points from a possible 21.

Remarkably, the club lost only once between their first game, to March to the following year, losing only five games across the whole season.

Barnet (2014/15)
Barnet certainly started as they meant to go on with a 5-0 demolition of Chester. The Bees only dropped points to Lincoln City in their opening month in an otherwise perfect start to the season.

The club scored 16 goals across their first eight games, only conceding two goals in their defeat to the Imps. Top scorer John Akinde found the net an incredible 31 times during the campaign as Barnet racked up 94 goals.

Despite only losing once through August, a lack of goals meant Luton didn’t really get going, and only won twice in their opening six games, scoring only five goals.

A loss to Wrexham in early September proved to be a turning point, as the Hatters then went on an unbeaten run that was to span seven months, staying top of the league from December until the end of the season.

Mansfield Town (2012/13)
Mansfield started their campaign with a sense of expectation following play-off disappointment the previous year, but things didn’t go to plan for the Stags as they began the season with two defeats to Newport and Gateshead.

A turbulent August continued with the club picking up back to back wins before a 4-1 loss to promotion rivals Grimsby Town.

Moves Made With The New Season Just A Fortnight Away  And just like that, there are only two weeks left until the real stuff starts up again.