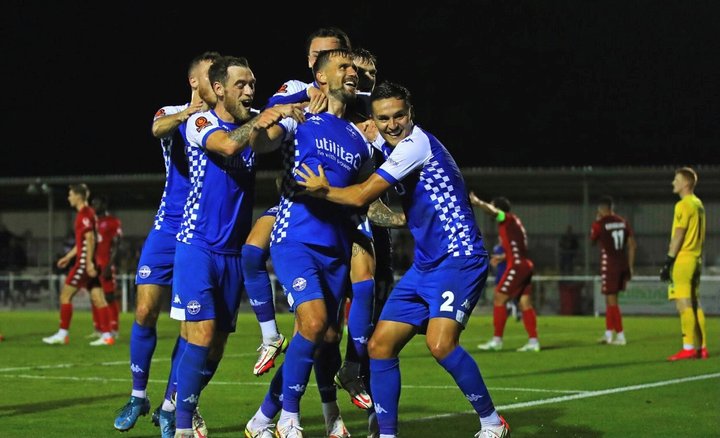 Another matchday another goal glut in the National League – just the 40 this time on another fruitful night.

Dagenham & Redbridge held onto top spot by the skin of their teeth after twice coming from behind against stubborn Weymouth.

Will Wright levelled and then put the Daggers ahead before Paul McCallum made sure late on.

Chesterfield did their bit to keep the pressure turned up.

Kabongo Tshimanga hit three but it was Gavin Gunning who scored the pick of the goals with a 35-yard free kick to see off Barnet who had levelled.

Eastleigh were in no mood for hanging around against Dover.

The Spitfires were home and dry at half time after Ryan Hill sparked a first half goal glut – Aaron Cosgrave got a consolation for the visitors after the break.

A bumper crowd at Grimsby witnessed their fine start continue – Wrexham put to the sword this time.

Erico Sousa cancelled out Jake Hyde’s opener for the visitors before Luke Waterfall and Max Wright capped a memorable night on the coast.

Stockport County made the most of two red cards for Maidenhead to register their first win in four games.

Joe Sbarra moved on to six goals in five games as Solihull Moors survived a late fightback from Torquay – Andrew Dallas had the home side ahead.

Aldershot are finally off the mark courtesy of a win at Southend – Jacob Berkeley-Agyepong hit the winner after Rhys Murphy put the hosts ahead.

Cal Roberts, Kyle Wootton and captain Kyle Cameron chipped in for Notts County who got their first home win of the season.

Boreham Wood remain unbeaten but were held at home by FC Halifax thanks to a double from Billy Waters.

In the one National League North game Darlington got their first win of the season against ten-man Brackley.