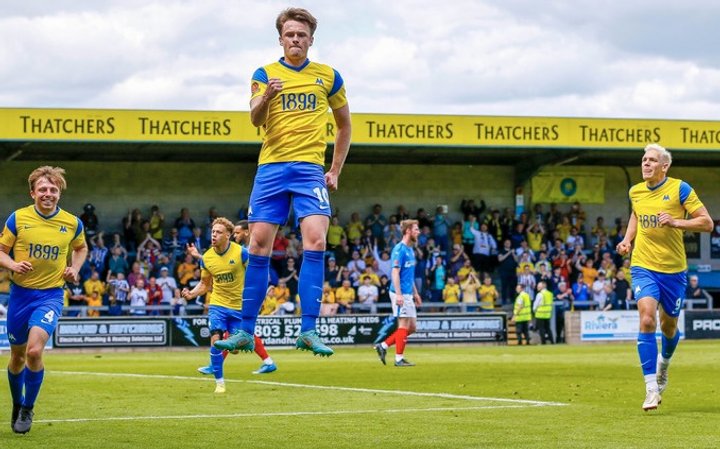 For some there is a week left but in the National League North and South it was a dramatic final day.

Chesterfield are hanging on to the final National League play-off place by their fingertips after their poor late season form continues.

In the live BT Sport game they went down 2-0 at Torquay United, Amarni Little, pictured, making the game safe from the penalty spot.

Moors were boosted by the new Aldershot Town hit a leveller at FC Halifax, Mikael Ndjoli equalising after Martin Woods put the hosts ahead.

Chesterfield still only need a last day point at home to Woking to secure their place.

Ira Jackson grabbed all three points for Wealdstone against King’s Lynn while Corey Whiteley thought he had scored a late winner for Bromley at home to Dover Athletic but the doomed visitors struck late to salvage a point.

Dan Smith’s 98th minute winner for Eastleigh at Woking sparked some wild scenes in the away end.

The National League North said goodbye to Guiseley, as Alfreton turned it around late to break their hearts and send them down.

AFC Telford United survive as they drew 1-1 with York City - Akil Wright making it tense after Keaton Ward put the Bucks in front.

Champions Gateshead sign off in style with a 2-1 win over Hereford, striking sensation Macauley Langstaff at the double.

They had joy in the winner-takes-all finale at Havant & Waterlooville.

Jordan Young got two goals and it saw them leapfrog the Hawks into seventh and Dorking Wanderers won’t relish facing them in the play-offs.

Those still looking up should beware of Marcus Dinnanga, who scored two more for Dartford as they thumped Eastbourne Borough 7-2.

Elsewhere there were season-ending wins for Concord Rangers, relegated Billericay, Dulwich Hamlet and Tonbridge Angels, who took three points in a thriller at St Albans City.

 Wrexham Blow Open Title Race As They Blitz Stockport Wrexham once again blew the title race wide open as the stunned Stockport County to return to the top of the table.

Huge Penultimate Weekend Has The BT Cameras Rolling  There’s a double dose of BT Sport action ahead this weekend - and you won’t want to miss a minute.