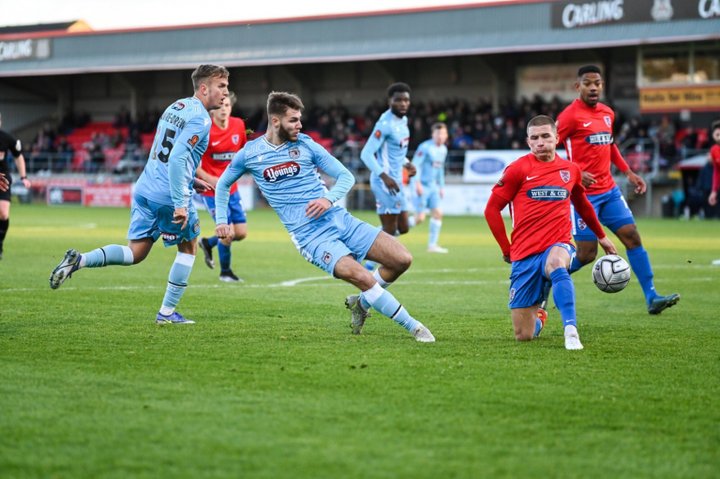 Bromley are up to third after finally finishing off ten man Wealdstone.

They needed a last minute winner from Byron Webster to do it - the 3-2 victory applied some real pressure.

Grimsby Town couldn’t take advantage of the teams above them being in FA Cup action.

They went down 3-2 at Dagenham, who put in a big performance after a tough few games.

Angelo Balanta won it after a helter-skelter game in east London.

Joe Sbarra got another goal and Adam Rooney stuck away a penalty as Solihull Moors beat Woking 2-0.

Barnet are looking so much better this season - they defeated Maidenhead United 3-0, Robert Hall’s wonder goal was a highlight.

Torquay United held on to a vital three points at Weymouth, Sinclair Armstrong got what turned out to be the winner.

Altrincham turned it around at Aldershot Town, 2-0 down they took home a point thanks to Ryan Colclough.

Yeovil Town are in the hat for the FA Cup third round - Charlie Wakefield’s goal secured victory over Stevenage.

The big National League South game was won by Dulwich Hamlet, who were again impressive in front of a sell out crowd.

They hit Ebbsfleet United for five to continue their great season.

Dartford still lead the way and a 1-0 win over Billericay Town was secured by Jake Robinson.

Reece Fleet again got the winner as Oxford City left Hungerford Town with a 1-0 win. They sit second.

The top two in the National League North are looking strong.

AFC Fylde were too good for Blyth Spartans. Nick Haughton got two as the Coasters ran out 4-1 winners.

Brackley Town didn’t break sweat as they left Bradford PA with a 3-0 success.

Jordan Burrow turned things around for Boston United as they came back from 2-0 down at Kettering Town to win 3-2.