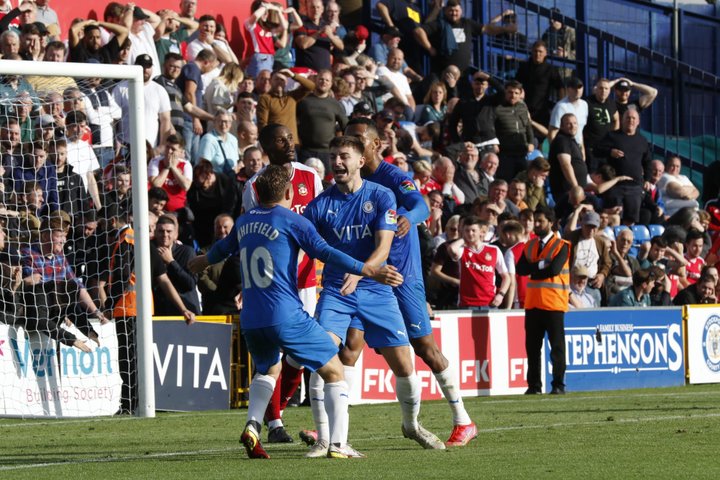 There were thrills and spills as expected on another intriguing afternoon of Vanarama National League action.

The game of the day produced great drama - Stockport County coming from behind to defeat promotion rivals Wrexham.

Ryan Rydel clinched a massive three points for Simon Rusk and his side in front of 7,771 fans at Edgeley Park, pictured.

Two-goal Kabongo Tshimanga was on song once again for Chesterfield but they didn’t count on a stunning late Torquay United fightback, live on BT Sport.

Dagenham & Redbridge delighted their fans as they swept aside Solihull Moors 5-1, Paul McCallum with another handy brace.

Boreham Wood keep the heat on as Josh Rees was the difference in a 2-1 win against Yeovil Town.

Kane Ferdinand pegged Grimsby back as Maidenhead United earned a valiant 1-1 draw with the in-form Mariners.

Eastleigh came back from the dead as they defeated Woking 3-2 in a thriller at the Silverlake.

Corey Whitely got the winning goal as Bromley left Dover with maximum reward.

Managerless Barnet are up and running thanks to a 3-1 win over Weymouth - their first victory of the campaign.

FC Halifax beat Aldershot 1-0 and it was the same scoreline as Wealdstone earned a big three points at King’s Lynn Town.

The top two keep impressing in the National League North.

AFC Fylde produced the goods in a tricky home game against Kidderminster Harriers.

Stephen Dobbie’s winner six minutes from the end kept them ahead of the early chasing pack.

Brackley Town passed another test and they also sit on 19 points - they won 2-0 at AFC Telford.

Gateshead are going great guns at home, Robbie Tinkler got things going in a 3-0 victory over Gloucester City, who parted with Paul Groves after this loss.

Clayton Donaldson was at the double as York City continue to pick up - they beat Darlington 2-1.

Glen Taylor got what turned out to be the winner for in-form Spennymoor at Kettering Town.

Chester had five different scorers as they hammered Blyth Spartans 5-1 while Alfreton are into the promotion places - they beat Farsley Celtic 3-0, Dayle Southwell getting two.

There were two six-goal salvos in the National League South.

Dartford found life easy at Welling United as the leaders eased to another win.

There was also half a dozen for Eastbourne Borough as they battered Braintree - Dom Hutchinson with two.

Joan Luque helped Maidstone United keep the heat on up the top. He nabbed two goals as the confident Stones won impressively 3-0 at Bath City.

Mark Jones got off to the perfect start at Hemel Hempstead as the Tudors won 3-2 at Billericay.

Tonbridge won 3-1 against Dorking Wanderers as their slow start continues.

BT Cameras Roll! Can Spireites Shine Or Is Gulls' Bite Back?  Nobody needs reminding about Christmas, especially when October still hasn’t arrived.