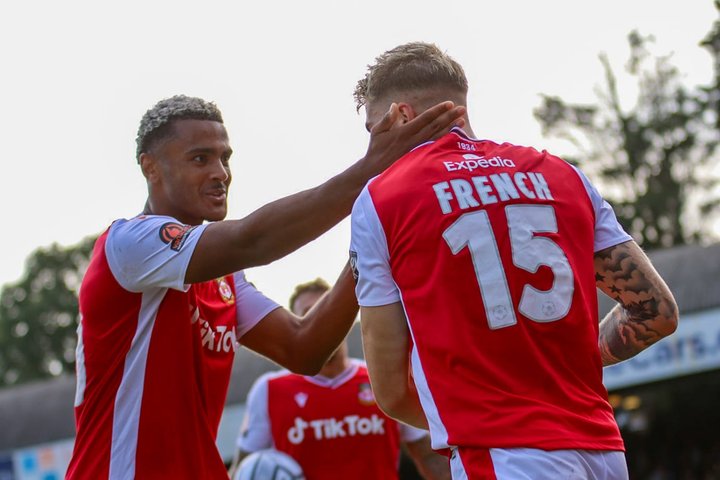 There were thrillers to be found everywhere you looked across the three National League divisions as one of the title chasers were hit for nine.

The Vanarama National League season is off to a flying start and fans soaked up some sensational matches.

Fast starters Dagenham & Redbridge had to make do with a point at home to Wealdstone - George Saunders earning a 2-2 draw to keep their unbeaten start going.

It was the same score at Southend as Dior Angus pounced to earn a comeback point for Wrexham in a Roots Hall thriller.

Chesterfield have also started superbly but Michael Cheek’s late, late leveller made sure Bromley left with a point.

A late Alex Hunt goal grabbed victory for Grimsby as they overcame Barnet 4-3 in a game that had everything.

Brett McGavin struck late on as King’s Lynn Town battled back to earn a 3-3 draw at Eastleigh.

Torquay United resisted a Maidenhead United fightback as they ran out 4-3 winners in Berkshire.

Callum Roberts turned it around for Notts County as they eventually got the better of Aldershot Town as it ended 3-2.

In the National League North there was a result which made everyone sit up and take notice.

Chorley scored nine goals against title hopefuls Gloucester City, who were reduced to ten men early on when Fabien Robert was red carded.

Connor Hall scored twice with seven others on the scoresheet at Victory Park as fans left stunned by what they had seen.

Elsewhere, there are no sides left with unblemished records.

AFC Fylde were held to a 1-1 draw at Kettering Town, as Brackley Town fired blanks at Blyth Spartans.

In the National League South, leaders Dartford showed again they are a team to be feared.

Regan Booty made sure Maidstone United keep the early heat on, confirming an excellent 3-1 win at Oxford City.

Despite a fightback, Havant & Waterlooville held firm to win 2-1 at Ebbsfleet in what was a big result for manager Paul Doswell.

Tommy Wright and Scott Rendell got the goals to win it inside the first five minutes.

Shaymen Showtime Or Can Glovers End BT Sport Bother?  For one of the sides, they are the great TV entertainers. But for the other, it’s usually a video nasty.