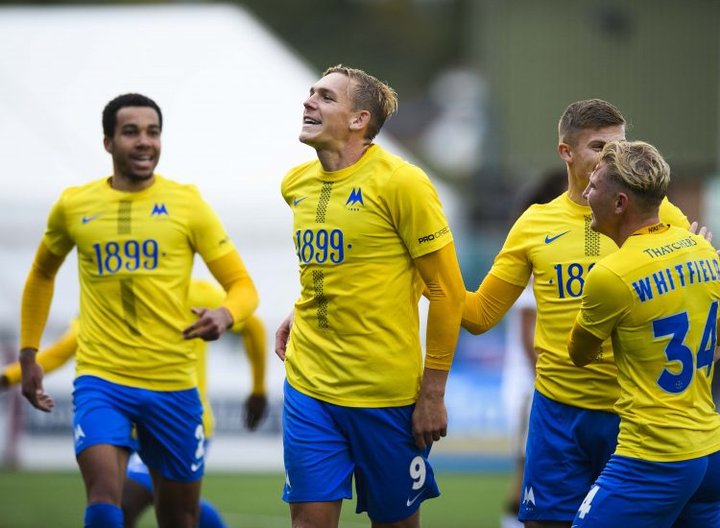 There were first National League wins for two promoted sides on Saturday - and perhaps the shock result of the season so far.

Maidenhead United twice came from behind to win 3-2 at in-form Notts County, a second win in five days for Alan Devonshire.

Danilo Orsi netted the winning goal to make it back-to-back wins for the part-timers at two very tough grounds to go to.

Wealdstone will say their defeat of Wrexham was equally as impressive.

The newboys also came from behind and took it 4-3 in a thriller as Michee Efete got what turned out to be the decisive goal for Dean Brennan’s team.

The Terras defeated King’s Lynn Town as Tom Whelan kept his composure to convert a late penalty to seal a 2-1 triumph.

Torquay United went top - for a few hours at least.

A fourth win from five was secured by Kyle Cameron, his double doing for Dover Athletic, who have now lost every game since stunning Notts County on the opening day.

It was a story of scoring wing backs after Mark Kitching put Jim Gannon’s team in front with a beauty fit for BT Sport.

Jordan Cropper lashed home for the hosts soon after but sub Alex Reid made it four wins from four and they sit proudly on top.

Woking couldn’t quite get a fourth win - they were held by hard-to-beat FC Halifax, it ended 0-0.

It was the same scoreline in East London as Dagenham and Yeovil fires blanks - neither getting the win they needed to kick-start their slow first few weeks.

Solihull Moors won for a third game in a row, Adam Rooney getting off and running with a winning goal as they beat Boreham Wood 1-0.

Alex Wynter turned out to be Eastleigh’s hero with a late leveller in a Hampshire thriller with Aldershot.

Alfie Whittingham thought he had done enough to claim all three points but the Shots couldn’t see it through and the defender made it 2-2.

Dorking Wanderers may not shock many by their great National League South start but Hungerford Town really are - they both continued their 100 per cent records.

The side who ended last season bottom are joint top now, they beat Concord Rangers 1-0 with the winner arriving when Ryan Seager again found the target.

Dorking look good this season and a 4-0 win at Braintree proved they mean business.

Maidstone and Oxford City both scored four too - the Stones easing past Hemel, while Oxford took Tonbridge to the cleaners.

An epic Slough Town comeback was maybe the moment of the weekend - dead and buried they nicked a point having been 4-1 down against Welling.

Gloucester City fired a National League North warning to the rest - as Matt McClure fired in a 26 minute hat-trick!

The Tigers striker got three as City sunk their teeth into Blyth Spartans, who actually went ahead early on.

York City and Brackley were both blunt - neither scored as the two promotion hopefuls went head-to-head.

AFC Telford are second, and resolute 1-0 win over Gateshead was secured by Aaron Williams’ first half goal.

Spennymoor got revenge over Chester for their FA Cup defeat last week with a 2-1 win.

A late own goal from goalkeeper Louis Gray sealed a dramatic victory for Jason Ainsley’s team in the North East.

There was also big wins for Southport, Hereford and for Curzon Ashton - who held firm to beat Farsley 2-1.