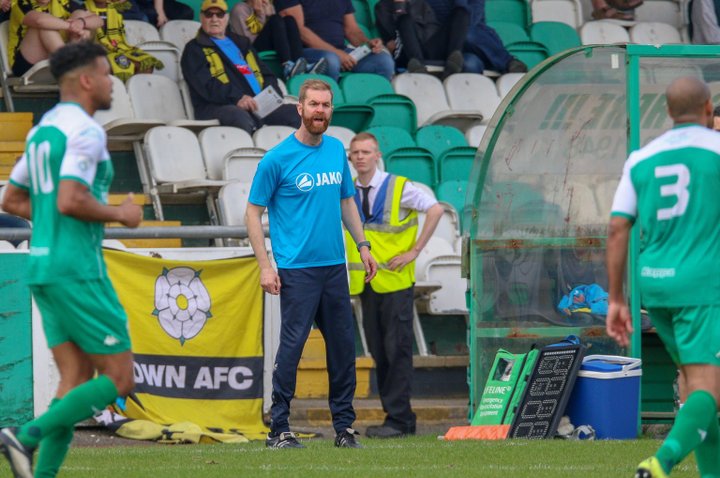 Simon Weaver has told his Harrogate Town side to not let their season fizzle out after they missed out on the National League North title.

Despite missing out on automatic promotion following a long and tough title race, Weaver wants his players to respond.

Harrogate will want to end their regular season campaign on a high against Curzon Ashton next Saturday before they tackle the play-offs.

On Saturday’s defeat, Weaver told HTTV: “I think Bradford deserved the three points, the first goal was extremely important because it was a tight affair.

“We’ve got to dust ourselves down because we’re still second. We have to reflect properly so people don’t undermine their own confidence and then move on.

“We haven’t been ourselves in the last two games. Maybe it’s because we’re so close to the end of the season before the play-offs.

“I’m disappointed we’ve had a blip and a bit of a lull over the last two games. We’ve had a chat in the dressing room and we’re all ready to come out fighting next week and we look forward to the play-off games.

“We’ve raised the expectations. We’ve had a cracking year and the last thing we want is for it to fizzle out. We won’t change our methods, we’ll hold our nerves off the pitch and I’m sure the lads will respond.”

Fullarton Says His Players Deserve All The Credit For Fine Run  FC Halifax Town boss Jamie Fullarton says his side all but securing their league status is a big achievement.