Watt?! South Title Is There To Be Won Says Hemel Boss Brennan 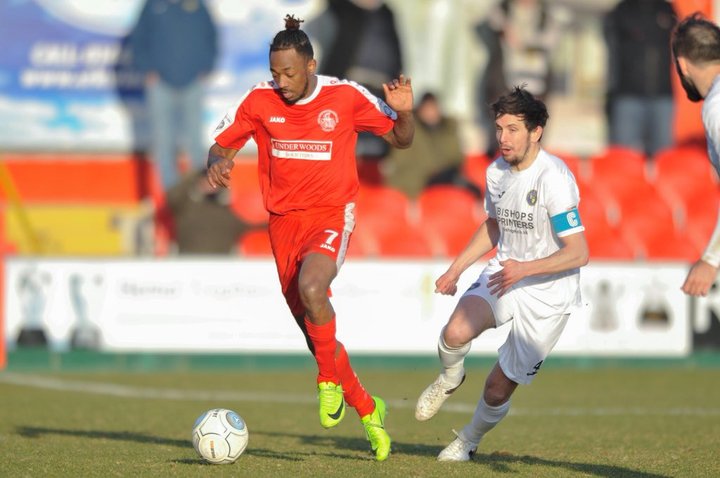 The Tudors climbed to fifth and seven points off leaders Dartford with a 2-0 victory over East Thurrock United on Tuesday night.

Talk of the game has since gone viral with media outlets across the world getting in on the act.

Not for the result, however, but for a bizarre incident involving forward Sanchez Watt. The loanee, who scored in the win, was originally shown a second yellow card after referee Dean Hulme mistook his name for dissent.

When booking Watt for kicking the ball away, the official asked the ex-Arsenal youngster his name and when ‘Watt’ was the reply, Hulme thought the Hemel man was getting clever.

He proceeded to show him a second yellow for dissent but quickly rescinded it when the situation was explained!

“We’ve got more structure and haven’t sold any players like we have done in previous years.

“We’re delighted with the position we’re in. There are no full-time teams in the division so there are lot of even teams doing well.

“Any team that can go on a run in the last ten or so games should pick up the trophy. We’re in the mix so we’re happy with how things are going.”

Watt is currently on loan with the Tudors from Isthmian Premier side Billericay Town and Brennan has been impressed so far.

“Sanchez found himself out of the game and wasn’t playing at Billericay but he’s done really well in the few games he’s played for us,” the boss added.

“I’m surprised he’s at this level, I have to be honest. He has got good vision and looks after his defensive responsibilities.”

Derby Day Looms Large, But Who Has The Upper Hand?  It’s almost that time again. The second cross-border derby of the 2017/18 National League season is just days away. Luke Turner looks at their last nine meetings.