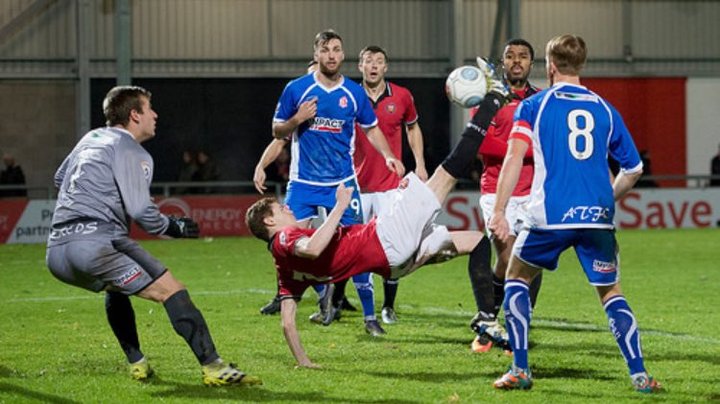 There were two matches in the Vanarama National League North on Tuesday night – both with significance at either end of the table.

This was a first-ever meeting between the teams and, despite the final scoreline, the outcome could have been a whole lot different had Kevin Davies` visitors taken their opportunities, especially in the first half.

However, instead, it was Kevin Wilkin`s Saints who went in for their half-time drinks two-up and Port were never able to recover from that.

After Jordan Hallam and Dan Cockerline had missed decent chances to put the visitors in front, Gareth Dean gave Brackley a 35th minute lead when he bundled the ball in from Shane Byrne’s free-kick.

Then, right on the stroke of half-time, Curtis Jones pulled back Lee Ndlovu and the referee awarded a penalty which was converted by Aaron Williams.

It was Williams who virtually made the points safe on the hour-mark when he slid in number three from Ndlovu`s cross.

And it was 4-0 in stoppage time when a great run from sub Matt Lowe was finished off by Shane Byrne.

FC United of Manchester began their game at Broadhurst Park against Alfreton Town a point and one place above the drop zone.

They ended an exciting finale by being in seventeenth spot, four points above third-bottom Nuneaton Town and level on points with their visitors after a comeback 3-2 win.

In front of a decent crowd of 1,546, things certainly didn`t start well for the hosts and caretaker boss Tom Greaves, who started the game.

They fell behind after 22 minutes when they failed to deal with a long throw into the box and Craig Westcarr headed in the loose ball.

And it got even better for the visiting Reds when, in injury-time at the end of the first half, Brendan Daniels fired in a free-kick from 22 yards.

Whatever was said in the dressing room at half-time had an immediate affect as FC United reduced the deficit just 3 minutes in with a fantastic overhead kick by Kieran Glynn – and on his birthday too!

But it still looked as though Alfreton were going to head back to Derbyshire with all three points – until 3 minutes from the end of normal time when Glynn was brought down in the box and Jason Gilchrist confidently converted the resulting penalty.

The momentum was now with the home side, and a minute from the end, a free-kick was half-cleared, but the ball was turned back into the six-yard box for Joel Logan to clip into the net to win it amid scenes of great celebration on the terraces and the bench.

 Hungerford Announce Development Plans To Increase Revenue A host of objectives have been announced by Hungerford Town in a bid to expand the club’s overall exposure, increase revenue and help strengthen the quality non-League action the club brings to the town.

Tremendous Night For National League As Woking & Guiseley Both Cause FA Cup Upsets  There were two replays in the Emirates FA Cup First Round on Tuesday night and two outstanding results for the Vanarama National League.