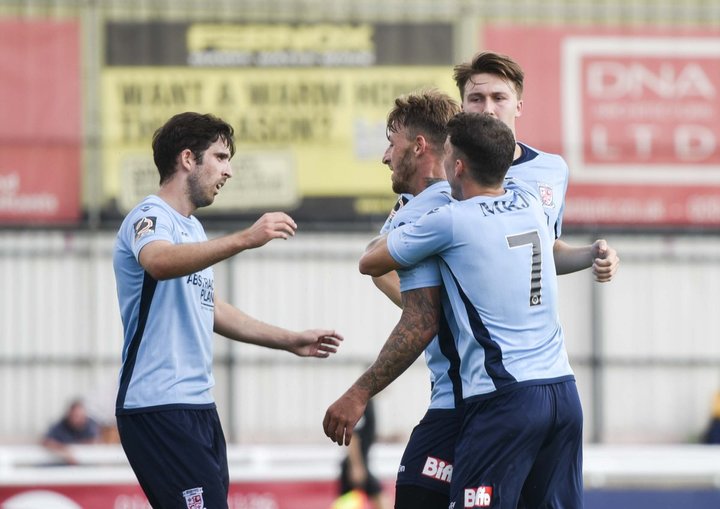 Woking diehard Jacob Greenwood fills us in on how the Cards are shaping up ahead of the new season.

League sponsors Vanarama have been getting the fans’ perspective ahead of the new season - which kicks off this Saturday.

At last the new season is nearly upon us - so what have you Woking fans got to look forward to?
After a season in the National League South, Woking fans will feel like the club is back where it belongs. The most exciting part of this for most fans is watching a better standard of football and competing against some big names such as Notts County.

The club are back after only a year away. Was there ever any doubt after Alan Dowson said “Don’t worry, we’ll be promoted” back in early April?
That was said during a run-in where, although we were playing OK, results weren’t going our way. One win in eight wasn’t the form we wanted going into the play-offs but the team really stepped up to the challenge and got us over the line. I think a high percentage of fans thought it was curtains in the play-off semi-final against Wealdstone when we were 2-0 down with 14 minutes to go, I think even Dowse will admit he was a tad concerned at that stage,but it turned into an incredible afternoon!

Are you pleased the derby with Aldershot is now back on, or would you prefer to be looking on from a higher division?
I think a lot of fans are excited about playing them again and I think playing them in our first home game will generate a great buzz. Our recent record against them is poor but hopefully we will see two good games this time round.

What’s been the best bit of business?
Signing Godfrey Poku from Wealdstone seems to be a great bit of business. Alan Dowson mentioned him a few times throughout the season and Wealdstone will be gutted to lose him. Having a gritty midfield player who can also play great balls will be a real asset this season.

Who will be your one to watch come Saturday afternoon?
It’ll be interesting to see how Dave Tarpey does. A proven goal-scorer in the National League South, he has never really had a proper shot at the National League due to injury. He has been looking sharp in pre-season and if he can show signs of getting back to his best, he will really be one to watch.

Who are the other sides to watch out for and could be in the promotion mix?
The teams that narrowly missed out last season will always be dangerous and do look to have been building on their squads. Other than the obvious front runners, Chesterfield and Boreham Wood are also two sides that I don’t think will be far away.

But which club will be this season’s surprise package?
I’d say Ebbsfleet are ones that could go under the radar and surprise a few. Garry Hill is a fantastic manager and although he doesn’t always sign the ‘big names’ he brings in players that will give their all. It wouldn’t surprise me if they are putting a lot of pressure on the teams at the top at some stage this season.

Who doesn’t love a road trip? Which ground are you most looking forward to visiting?
I think a lot of people will go for the obvious one which is Notts County. Woking played Stockport in the FA Cup a few seasons ago at Edgeley Park and that was one of the best grounds I’ve been to, so I am certainly looking forward to getting back there.

And what game would you like to take three points from more than any other?
I think I’d have to go for the obvious one and say Aldershot Town. It wasn’t long ago they were in the play-offs and we were staring down the barrel of relegation - now they’re lucky to be in the same division as us. This one would mean a lot to all Woking fans.

You can snatch an opposition player. Who is it?
Armani Little was crucial to our promotion last season, even scoring the winner in the play-off final. It was sad to see him leave the club and Torquay will be delighted to have him on-board. He dictates play in the middle of the park, is a key attacking threat and is brilliant at free-kicks.

Finally, the big question - where do you think the Cards will finish?
I am hoping that the momentum from last season and some key loan signings will be enough to see us stay up and hopefully try to push into mid-table. All of that said, we will have the lowest budget in the league, so 19th would be brilliant!

Vanarama have recently launched the National League Club Reward scheme to help fans back their club’s budget. Every time a fan takes out a brand new van lease with Vanarama or a brand new car lease with Motorama their club will earn £100 and you will receive £30 cashback.

 The Vanarama National League Club-By-Club Guide With only one day to go until the start of the new season, we’ve prepared a special Twitter Club-by-Club guide.