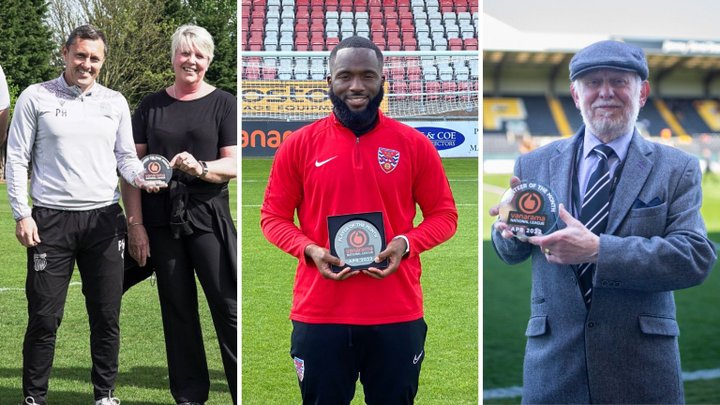 It’s time to put awards in hands in the Vanarama National League and we’ve got some very deserving winners to introduce you to.

As has often been the case this season, it took days of discussion before the panel finally picked the names they want to engrave on the trophies.

April is always the sink or swim month and as boiling point was reached, there were some who kept their campaigns bubbling away.

Grimsby Town fans didn’t quite know what to expect this season as they returned to the National League after five years away.

But Paul Hurst and his players softened the blow of losing their EFL status by giving their supporters a real season of encouragement - and it’s not over yet!

Thanks to an unbeaten April, the Mariners put some distance between themselves and the top-seven chasers - and threw a spanner in the works of their rivals’ promotion bids.

They also beat King’s Lynn Town and in-form Torquay United, before coming back from the dead late on to draw at Barnet.

Hurst’s team don’t give others a minutes’ peace and you certainly can’t count them out of an instant League Two return.

Dagenham & Redbridge also came on strong late on and a lot of that is to do with Junior Morias.

He scored six goals in six games in April, a 12-minute hat-trick against Barnet added to goals against Bromley, Wealdstone and Aldershot Town.

By the end of the month he had ten in a dozen matches and really started firing at the right time.

Daryl McMahon had told him to play with a smile on his face and he’s now beaming.

We take great pride in selecting the Vanarama Volunteer of the Month and this season we have been able to honour more of the most deserving and dedicated people across the country.

Mick Chappell is excited about Notts County’s future, but he also has a passion for the past.

He has been a huge help to the club for many years in his role as Honorary Historian, with his knowledge of the club’s history described as encyclopedic.

Always primed and ready to assist with any queries club staff or fans have, there’s little he doesn’t know about his beloved Magpies.

The lifelong fan is an ever-present in the press box at home matches, keeping match stats and making sure the media’s facts just can’t be wrong.

County tell us he is also pro-active in engaging former players and historical figures, often inviting them to games as his special guest.

Congratulations to all the brilliant April award winners!