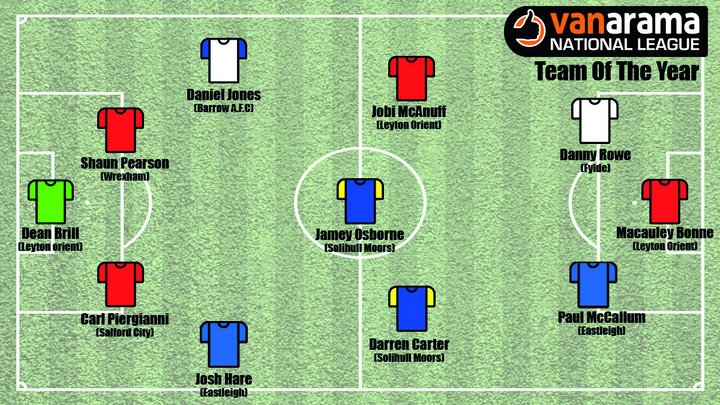 After eight months’ worth of toil, we can now confirm the National League Team of the Season. Voted for by the clubs, here is the select side which we are delighted to honour.

Goalkeeper: Dean Brill (Leyton Orient)
An ever-present between the sticks for the Vanarama National League title winners, amassing over twenty clean sheets across all competitions in the process. After initially joining the O’s as a Goalkeeping Coach less than two years ago, the 33-year-old has been a consistent performer since making his debut back in December 2017. With crucial saves throughout the season to earn Orient points on his own at times, Brill takes the gloves in this quality side.

Right-back: Josh Hare (Eastleigh)
It’s not often the wide defensive players get recognition, but that’s been far from the truth for Eastleigh’s Josh Hare this season. Operating in a more advanced role for the Spitfires, the wing-back has been pivotal in earning a top seven finish for Ben Strevens men, with maturity in dealing with his defensive duties and bundles of energy to join attacks.

Centre-back: Shaun Pearson (Wrexham)
It wouldn’t be a Team of the Year without the inclusion of Shaun Pearson in the side! The experienced centre-half has been at the heart of one of the tightest defences in the fifth tier, developing a formidable partnership with Jake Lawlor. A true heart-on-the sleeve defender, with performances that lead by example for the North Wales outfit.

Centre-back: Carl Piergianni (Salford City)
A colossal centre-half who is without question “dangerous in both boxes”. Piergianni, like Salford City, has taken to the step up to the Vanarama National League with ease this season. Not only as Piergianni kept things tight as part of a back three for Graham Alexander’s side in recent months, he has also hit double figures at the other end of the pitch.

Left-back: Dan Jones (Barrow)
During a rather inconsistent season for Barrow, Dan Jones has shone again for the Bluebirds. The wing-back epitomises the famous “wand of a left-foot” expression in football, with deadly deliveries in the attacking third of the pitch. With performances rewarded with England C recognition, Jones’ reputation continues to grow.

Central midfield: Jobi McAnuff (Leyton Orient)
Mr. Reliable in E10. The experienced campaigner is like a fine wine and seems to get better with age. With a change in formation halfway through the season, the 37-year-old has adapted to the less familiar role in central midfield with ease. Having accomplished plenty throughout a fantastic career to date, this year’s achievements may well be top of the list!

Central midfield: Darren Carter (Solihull Moors)
An experienced head in a robust side, Carter has shown he can mix it with the National League’s best when it comes to consistency. What a season it was for the Moors, who were bottom of the table at the start of 2018. They almost went full-circle, but took the runners up spot before falling just short against Fylde in the play-off semi-final.

Central midfield: Jamey Osborne (Solihull Moors)
After returning from Grimsby Town to Solihull Moors in January 2018, Osborne has been part of a huge upward curve at The ATG Stadium. As the more creative prong of a terrific trio in Tim Flowers’ midfield, the 26-year-old has been a thorn in many a National League side this campaign with his ability to play a killer pass and an eye for a long-range strike.

Striker: Danny Rowe (AFC Fylde)
It’s no surprise to find the Player of the Year included within the Team of the Season. Another red-hot season sees striker take up a place in the XI with an impressive … goals to his name for the 2018/19 campaign. In the forty seasons of The National League, has there ever been a more lethal frontman?

Striker: Macauley Bonne (Leyton Orient)
All good teams need a good striker. Look no further than Leyton Orient’s Macauley Bonne. After starring in a disappointing campaign for the O’s in 2017/18, the Zimbabwe international has been a key figure again this time around. Bonne fell just short in the individual goalscoring charts of claiming the golden boot, but he won’t worry too much while polishing his league winner’s medal.

Striker: Paul McCallum (Eastleigh)
A striker in the form of his life. When it comes to reliable goalscorers, few have been better than Eastleigh’s Paul McCallum this season. No player in the top sixth tiers has scored a higher percentage of a Club’s League goals than the former West Ham United youngster. The Spitfires are flying, and they have a lot to thanks their marksman for.

Bromley Get Busy Again As Cheek Agrees Deal  Bromley have continued their busy start to the summer by adding Ebbsfleet United striker Michael Cheek to their squad.