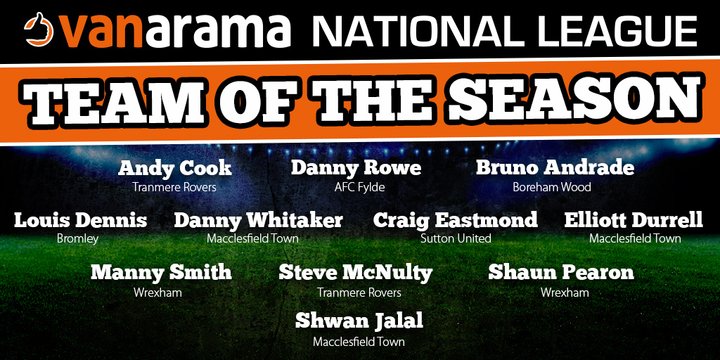 We are thrilled to announce the eleven players who have shone brightest over the past nine months.

The new play-off system ensured that the season remained alive for most clubs right up until the final weeks of the campaign whilst relegation matters were only decided on the last day of the season.

Picking the best starting XI from the National League is no easy task. So we asked our member clubs - who have seen everybody up close and personal - to have their say and ensure the right team was picked.

It’s extremely tough on those that missed out and congratulations to the players that made it in - they fully deserve their recognition.

Do you agree with the clubs’ voters? Join the debate on twitter and let us know @TheNationalLge

Shwan Jalal (Macclesfield Town)
Every title-winning team has a reliable man between the sticks. Jalal returned to the Moss Rose last summer and went on to play in 41 of Macclesfield’s National League games, keeping 15 clean sheets.

Manny Smith (Wrexham)
They may have missed out on the play-offs but Wrexham had by far the best defensive record in the division. Smith had an impressive campaign, missing just two games for the Dragons.

Steve McNulty (Tranmere Rovers)
It wouldn’t be a Team of the Year without Steve McNulty in the side! The experienced defender has led the Tranmere defence this season and showed his quality yet again.

Shaun Pearson (Wrexham)
The Dragons’ skipper formed a formidable partnership with Manny Smith and they ended up conceding just 39 times in 46 games - an impressive record. Pearson led by example and missed just one match.

Elliott Durrell (Macclesfield Town)
Released by Chester, Durrell made the move to the Moss Rose last summer and the rest, as they say, is history! Goalscoring midfielders are hard to find and Durrell’s eight goals were crucial for Macclesfield.

Danny Whitaker (Macclesfield Town)
Macclesfield’s Mr Reliable. The 37-year-old is like a fine wine and seems to get better with age. The driving force in Josh Askey’s midfield, Whitaker also chipped in with nine important goals.

Craig Eastmond (Sutton United)
One of the key reasons behind’s Sutton’s fantastic campaign. Eastmond, in his third season at Gander Green Lane, has again proven he can mix it with the National League’s best with impressive consistency.

Louis Dennis (Bromley)
His reputation continues to grow. He is coming off the best season of his career with 13 National League goals to his name and he also helped Bromley reach the FA Trophy final.

Andy Cook (Tranmere Rovers)
Another player in the form of his life. Every club needs a reliable goalscorer and Cook is just that. He scored 26 National League goals for Micky Mellon - a fantastic return for Rovers.

Danny Rowe (AFC Fylde)
Well, of course, the Vanarama National League Player of the Season was going to make it in! Rowe has made the step up with ease, netting 24 times for Fylde as they secured a top-seven finish.

Bruno Andrade (Boreham Wood)
The forward’s stock continues to rise and there will no doubt be a few more eyes on him following a season that brought 20 National League goals for promotion-chasing Boreham Wood.

 Little Wood? They Are Reaching For The Stars By 5pm on Saturday it is possible The Football League may be welcoming the smallest club it has ever had.

Cowan Returns To Telford As Bucks Name New Boss  AFC Telford United have gone Buck to the Future - they have announced former player Gavin Cowan as their new manager.