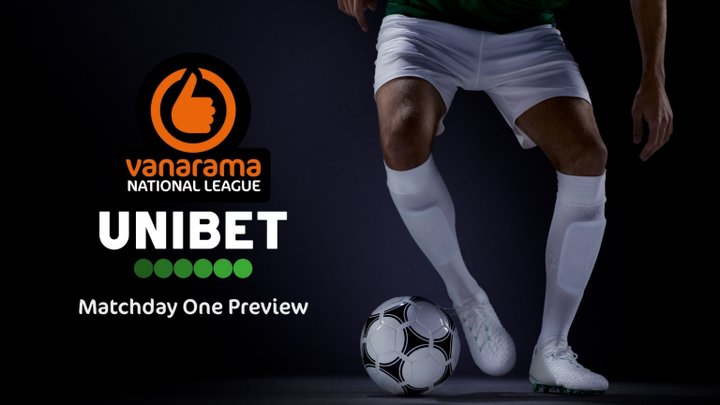 The day we’ve been waiting for is nearly here - but who will catch fire on the opening day of the Vanarama National League season?

The talking finally stops on Saturday as the sides return to battle with the prize of a place in the EFL once again up for grabs.

But a large number of clubs want one of those two precious spots - and a flurry of summer activity shows how desperate they are to get it!

Every week, new betting partner Unibet will run the rule over the three main matches ahead of us that weekend.

Here are the pick of the games coming your way on Saturday as it’s curtain up around the country.

County fans haven’t looked forward to a season quite as much as this one for a very long time.

But back in Edgeley Park in big numbers, they face a side who ended the last campaign fantastically well.

Daryl McMahon’s Daggers saw out 2020-21 with eight wins from ten.

One of the two matches they didn’t win in that epic run came at County, a 1-1 draw ending Simon Rusk’s team’s outside title hopes.

They didn’t end badly, either. The only loss from early March until the middle of June came in that agonising play-off semi-final defeat to Hartlepool United.

Both managers have been able to keep the core of their team who finished so well together - and both are well backed to put in a challenge.

One to watch: Paddy Madden (Stockport County)
Unibet's big tip: Both teams to score and a total over 2.5 goals

After a very productive summer, you can officially class Chesterfield as having a right go for it this season.

After coughing up what Boreham Wood wanted for top scorer Kabongo Tshimanga, you begin to understand why James Rowe’s team are so fancied.

They were inspired by the manager’s arrival last year, going from the bottom three to the play-offs inside a matter of months.

It was perhaps a season too soon, but the Spireites are in the mood and a deep squad with options everywhere points to a productive campaign.

What Aldershot Town manager Danny Searle would give for their backing in the transfer market.

The Shots know they have to do things differently and after two years of shock champions they know stranger things have happened!

One to watch: Kabongo Tshimanga (Chesterfield)
Unibet's big tip: Chesterfield to win and both teams to score

They haven’t exactly gone under the radar since their A-List new owners burst into town.

Now it’s time to see if Wrexham are going to live up to all this expectation.

Seeing off a number of League One clubs to land Paul Mullin, the club may have finally found the regular scorer they have missed season after season.

Solihull Moors will be happy not to be talked about, Neal Ardley putting together a strong looking squad while other teams steal focus.

The Dragons won’t have it all their own way on Saturday.

Moors won 15 of their 21 home games last season, and had the second best defensive record on their own patch.

One to watch: Paul Mullin (Wrexham)
Unibet's big tip: A score draw to kick-off the campaign.