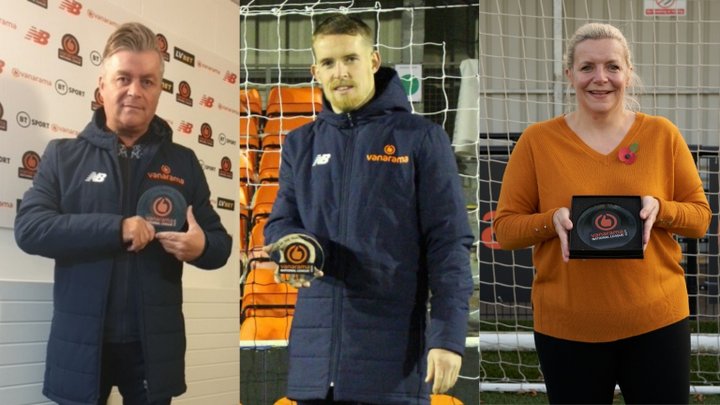 The first Vanarama National League South awards of the new season are here - but who has been recognised for their efforts?

We’re thrilled to present the Manager, Player and the Volunteer of the Month as the new season started in style following the long lay off.

Steve King could do with something to smile about after that familiar sinking feeling in the summer.

As hard as the experienced Dartford manager tries, he just can’t shake defeat in Promotion Finals.

So there’s only one thing for it - not needing the play-offs at all!

That certainly seems to be his mantra this time around. The Kent club have ended October with 13 points from a possible 15, while kicking some promotion rivals into touch in the process.

The Manager of the Month have overseen wins against Chelmsford City, Bath City, Chippenham Town and Havant & Waterlooville - and they picked up a useful draw at Hampton & Richmond Borough.

Who would have thought Hungerford Town would be the team they’re all talking about?

After finishing last season bottom, the Crusaders won four of their first five - a flying start nobody could even have predicted.

Midfielder Mike Jones has been central to their sensational first month.

He would have had to have gone some to pip five-goal striker Ryan Seager to the award - but those at Bulpit Lane know how exceptional Jones has been.

He may not have the goals of his centre-forward colleague, but a number of Man of the Match displays underlines his importance to the side.

These, of course, are testing times for everyone - and football fans have certainly felt it as much as many since March.

So we feel the Volunteer of the Month has never been more important.

Slough Town star Lucy Tebbit has made sure everyone stays safe during the pandemic - in more ways than one.

The Rebels supporter has been an avid fan at both home and away games for many years, with her husband, father and her father-in-law.

Lucy has been our First Aider for a while now, but during the Covid-19 period she has stepped up to help with testing, supporting the players, management and the committee with all things COVID related.

She does all this whilst working full-time on the front line at a local hospital.

Having Lucy’s support has meant that the club are secure in their COVID response on matchday and in preparation for the play-offs in July. Everything she does, she does with a smile and they say she is an absolute pleasure to have her on board.

 Oxford Go Looking To Make Up The National League Numbers Tonight Oxford City may be no strangers to this stage of the FA Cup in recent years, but tonight they could help do something rather special.

National League North's October Monthly Award Winners Revealed!  It’s been a month of football like we’ve never experienced before, but one thing remains exactly the same - the need to honour those who are shining on and off the pitch.