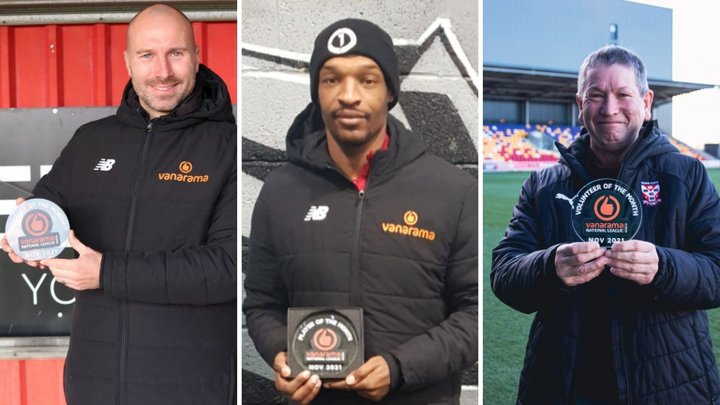 It was a month to really remember - so it’s high time we put awards into the hands of some very worthy recipients.

We are delighted to present to you the big winners from November after a stellar four weeks in the National League North.

There were a number of clubs who really stood out last month with a number embarking on incredible runs.

Kidderminster Harriers were certainly one of those and Russ Penn is really starting to make a name for himself in management.

They begun the month with a wonderful FA Cup win against Grimsby Town.

His team followed that up by beating AFC Telford, Alfreton Town and Gloucester City in the league.

FA Trophy success at Hereford ended a flawless few weeks and Penn’s side are still pushing on three fronts with 2022 coming into focus.

Hereford themselves haven’t exactly had a bad time of it lately.

For a team who were struggling for a win not so long ago, November saw them see off Chorley, Guiseley, Blyth, Chester and Kettering.

Central to their surge up the table is defender Krystian Pearce.

He has come in and been a huge influence in Hereford’s upturn with no league goals conceded in that five game winning run.

Starting the month in 21st, they ended it in 9th and with Pearce keeping things in place, fans don’t see why they can’t make a play for the top seven.

We’re certainly proud of the Vanarama Volunteer Of The Month award.

There’s nothing better than ensuring those who dedicate their time to their club are rightfully honoured.

Richard Ingleby loves York City and there’s no doubting his commitment to the cause.

He is a big part of the YCFC Volunteers group, whose main purpose is to ‘deliver outstanding matchday experiences’ – and with a new ground, the club have been thrilled with his help.

But there’s more to his stadium support and he helps with the labour-intensive task of installing and removing pitch-side advertising boards and he also facilitates the Foundation’s Sporting Memories group.

There’s not a Minsterman more positive as he makes sure every fan gets everything from their day at the club.

Johnson And Morley Make The Move To The Moors  Anthony Johnson and Bernard Morley haven’t hung around - they are back in football with Spennymoor Town.