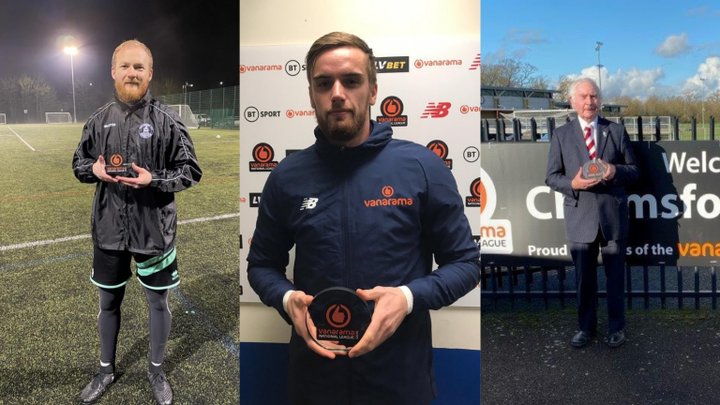 The New Year always brings new hope so the time is right to honour those who started 2021 in style in the National League South.

We are delighted to present to you the division’s Manager, Player and the Vanarama Volunteer of the Month and there are some very worthy winners.

It’s fair to say 2020 wasn’t a year to live long in the memory for many Chelmsford City fans.

Last season their planned play-off push never got off the ground and the first three months of the new campaign hadn’t been anything to write home about.

Robbie Simpson took over after the departure of long-serving manager Rod Stringer in March and he learned fast that the job wasn’t going to be an easy one.

But 2021 is already looking brighter. What better way to start the New Year than with a thumping win over rivals Braintree Town? That was followed up by a 2-0 victory at title-chasing St Albans City.

That hard work looked to have been undone at Billericay - but after going 3-0 down, they bit back to claim a point.

Simpson is settling in after a challenging start and the Clarets boss is the month’s top boss.

In September, Ben Dudzinski decided that he is fed up of playing the understudy - and this season he is starting to steal the show.

The Oxford City goalkeeper has been a squad player and Sutton United, Darlington and maybe to a lesser extent Havant but now he is, well, looking after number one.

Ten points claimed and FA Trophy progression in January had a lot to do with their gifted glovesman.

Three away wins inside ten days helped catapult Oxford into the top seven as they fight on both front - Dudzinski is the deserving Player of the Month.

We love the Vanarama Volunteer of the Month Award as those who give up their time are rightly acknowledged.

It’s a Chelmsford City double as David Everard makes it a month to remember.

Few are as committed to the Clarets than the long-time supporter, who has really stepped up during the pandemic.

Carrying out risk assessments as well as making clear all Covid protocols, he ensures matchdays run smoothly - and there wouldn’t be games without him.

Safety officer David leaves no stone unturned to keep his club ticking over in these concerning times.

 National League's January Monthly Award Winners Revealed! The New Year always brings fresh hope for many – and 2021 started in a memorable way for some in the National League.