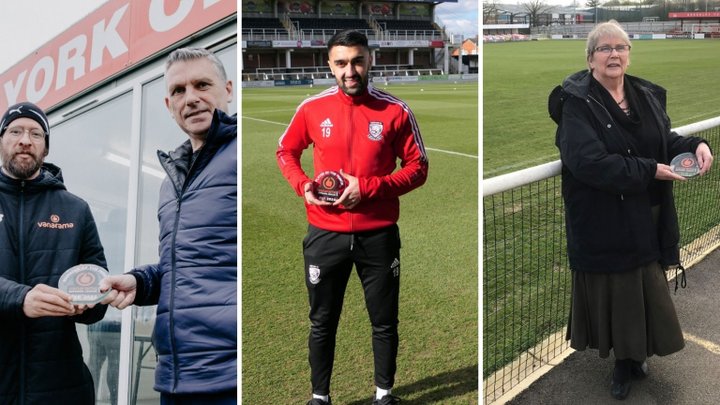 We would like to introduce you to your three National League North award winners for February.

It was a big month for a number of clubs and the panel worked around the clock to ensure the most worthy of winners were recognised for last month.

John Askey has made quite the impression since he arrived at York City.

The club made the decision to part with Steve Watson late last year - and gave the job to his newly-appointed assistant.

He and his players had a 100 per cent record in February and now they sit in the play-off places.

He also guided the Minstermen into the FA Trophy quarter-finals, setting up a last eight tie at Dagenham & Redbridge.

Nobody scored more goals than York during the month, they hit 13 to quickly move themselves up the table.

Fans think Askey is the answer and they’re right in the promotion mix.

Hereford had a great month too, and Maziar Kouhyar stole the show.

He grabbed three goals to keep the Bulls pushing towards the top seven - scoring two against Guiseley and one vs Chester.

Influential in the win against Boston United and despite not scoring, he provided the assist for the winning goal.

Hereford finished the month in the top seven and that’s where manager Josh Gowling wants them to stay.

We love the Vanarama Volunteer of the Month, allowing us the opportunity to honour the great and good around the country.

Judith Shaw answered Brackley Town’s call when they asked for someone to lend them a hand.

She has been described as their ‘lynchpin’ in their ticketing operations on match-days and goes above and beyond for the Saints.

When the system goes down or something fails, Judith is just unflappable - and comes into her own when under pressure.