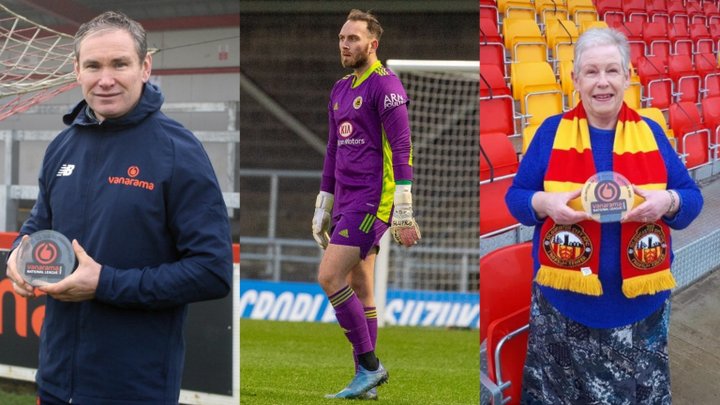 A challenging year’s final month saw a number of Vanarama National League North clubs end on a high – and the time has arrived to honour their achievements.

We’re delighted to present the division’s Manager, Player and the Vanarama Volunteer of the Month to you as the season began to really take shape.

December was brilliant for Brackley Town - and after a surprisingly slow start to the campaign they put themselves firmly back in people’s promotion thoughts.

They started the month with a good point at Leamington, before wins over Guiseley, Spennymoor Town and Blyth Spartans.

They ended 2020 with a fantastic and dramatic win over league leaders Gloucester City and it sets them up perfectly for a push in the New Year.

Kevin Wilkin is one of the division’s longest serving managers and his team are starting to show they mean business.

It was also a big month for everyone at Boston United, on and off the pitch.

A great draw at Gloucester was followed by a set-back against Chorley before Blyth Spartans, Alfreton Town and Farsley Celtic fell.

Key to a lot of that is goalkeeper Ross Fitzsimons, the 26-year-old in fine form between the posts, including a Man of the Match performance versus Chester and two penalty shootout save in an FA Trophy victory over AFC Fylde.

Five clean sheets last month tells its own story and he will be crucial in 2021 as the Pilgrims look to push on in their plush new home.

Mim Mitchell, like all Gloucester City, has waited more than a decade to see her club play a home game.

She has followed them for over 70 years – but she doesn’t just sit in the stand waiting for the goals to go in.

As well as travelling far and wide supporting the side, the Tigers’ longest standing fan continues to provide hospitality to all visitors, and she puts her skills to very good use.

Mim bakes delicious cakes for every home match, and always makes sure the ground is in a good condition so people can enjoy them.

Her enthusiasm for the club makes her the perfect candidate – she will surely celebrate with a cup of tea and a Victoria sponge!

Congratulations to our all December Award winners.

Magpies Flying Again On A Thrilling Day Of Action For Our Sides  It was an FA Cup and National League double bill on Saturday - and it made for box office viewing.