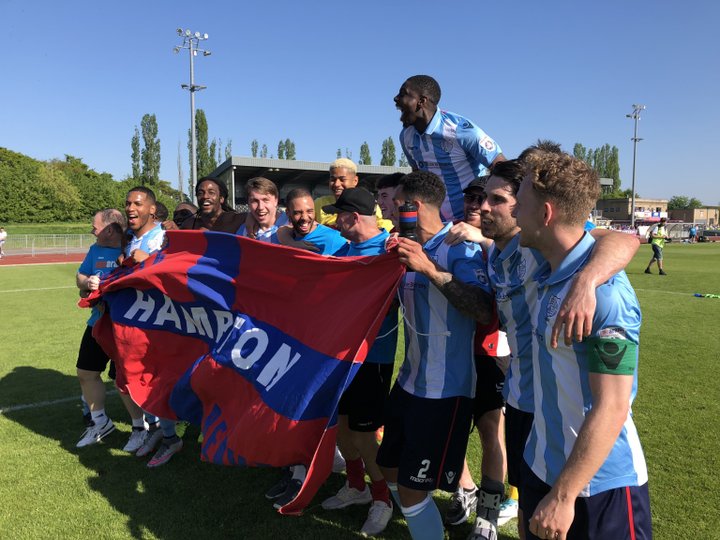 Gary McCann knows it will take time for the new regime to settle in and things to come together at Hampton.

It’s all change at the Beveree - new boss McCann replacing Alan Dowson, with a number of the club’s top performers joining him at Kingfield.

Hampton have already signed ten new players and there is no sign of the arrivals ending.

McCann is still hoping to persuade a number of the squad which took Hampton to the National League South play-off final, pictured, to remain.

He knows the overhaul is going to need time but says there is no reason why they can’t make a good start if pre-season goes to plan.

He told us: “We knew it was going to need a large number of new players so we had to get down to work right away.

“A number of last year’s team were always going to follow the old manager, and Hampton had a few loan players who have returned to their patent clubs.

“We are rebuilding but we are excited by that challenge. It’s a bit of a blank canvas in a lot of ways.

“When you have a large number of new players join it is important to have a good pre-season and bond.

“We’re looking forward to getting started and moulding our team together. It won’t happen overnight but we feel we have signed some good players who can thrive and work well as a team.”

 Get Carter! It’s Next Stop Chesterfield For Woking’s Star Charlie Carter has signed for Chesterfield following a fantastic season for Woking.

Gillies The Latest To Sign For Shields From Darlington  Darlington have lost a second important player to ambitious South Shields this summer, writes Aidan Jones.