The National League Team Of The Weekend Is Announced! 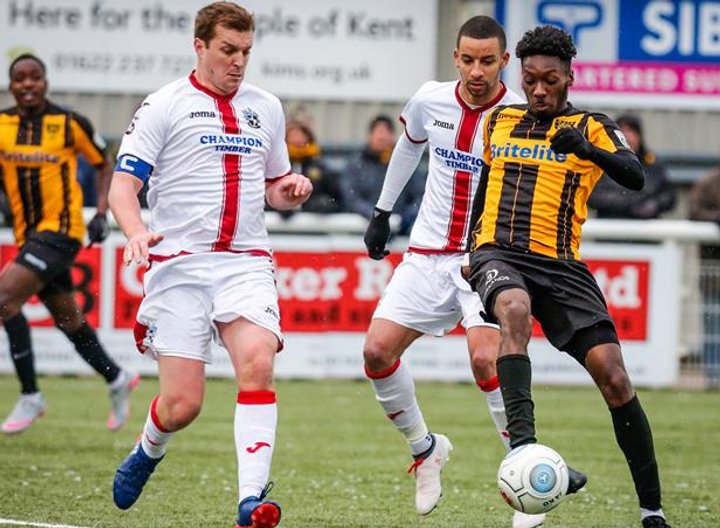 There’s just two Saturdays to go, and as we’re getting all emotional about the prospect of our final few Team of the Weekend selections until August we know there’s little time to get caught up in the moment.

Things are just too important and there’s far too much on the line to give the summer even a second thought.

Team selection this week wasn’t easy. There were a number of big result and huge individual performances.

We had to be really, really cut-throat with our picks with many worthy candidates forced to miss out. The quality was sky high on Saturday.

Our process is simple. We enlist the help of managers, club officials and journalists from all over the country to help cobble together 11 starters, 5 subs and a skipper for the day.

But if you think we’re dropped the ball, tell us! Join the debate on twitter @TheNationalLge

The National League Team of the Weekend

Goalkeeper: Mark Cousins (Dagenham)
The 31-year-old played a key part in the Daggers comeback. Keep an eye on the National League’s twitter timeline and our instagram later for his brilliant double save

Defender: Max Kilman (Maidenhead)
When you’re a defender and you score a 30-yard winner with seconds to go you know you’ve had a good day. Now, KIlman’s weekend is complete!

Midfielder: Larnell Cole (Tranmere)
If it is to be the play-offs for Rovers, this man could be their wildcard. The substitute’s incredible range of passing excited the 5,500 inside Prenton Park as Aldershot were undone.

Midfielder: Dean Rance (Ebbsfleet United)
Not just the winning goal but an all-action display driving Fleet forward at Barrow. The long trip was worth it.

Midfielder: Darren Carter (Solihill Moors)
He’s got all the experience in the world and has put it to good use to guide Solihull so close to safety now. Captain.

Midfielder: Fejiri Okenabirhie (Dagenham)
The Daggers’ outstanding player this season was at it again at Wrexham. Scored another and was a constant threat.

Striker: James Norwood (Tranmere)
He’s playing catch-up to Andy Cook and his two goals but he’s certainly still around! Their partnership will be feared in the play-offs for sure.

Striker: Blair Turgott (Maidstone United)
This may be the most important goal he ever scores. His winner beat AFC Fylde - are gave the Stones a massive survival lift.

Striker: Morgan Ferrier (Boreham Wood)
The Wood badly needed this all-action display against Chester to restore belief and thanks to strong-as-an-ox Ferrier, a goalscorer, Chester didn’t trouble them too much.

 Flanagan Urges Nash To Take Chance In Battle To Stay Up Curzon Ashton boss John Flanagan says his side need to get it right as they look to move a big step closer to safety from relegation in the National League North.

BT Cameras Roll! An Additional Live TV Game Is Announced  BT Sport have confirmed another live match next weekend - and this time the bubbly could be flowing.