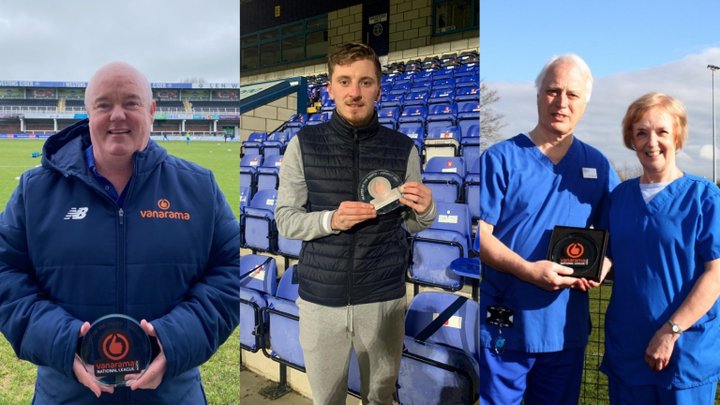 The New Year always brings new hope and it’s time to honour those who started 2021 in style in the National League North.

We are delighted to present to you the division’s Manager, Player and the Vanarama Volunteer of the Month.

Paul Holleran is a proud man - just ask his Twitter followers as he keeps everyone up to date with the progress of the former Leamington players who are currently taking a starring role in the EFL.

He has a growing reputation as a dream maker and the Brakes’ current crop aren’t too bad, either!

They started January by keeping leaders Gloucester City in check with a worthy 1-1 draw, before a 2-1 win at in-form Chorley. It left them outside the play-offs on goal difference before the recent break.

Then came an impressed 3-0 FA Trophy win at Kettering - January’s Manager of the Month has Leamington in great shape.

Chester fans haven’t been happier with their club’s players for quite some time.

Second in the division and playing with heart and vigour, the Blues look the real deal. They are now a club simply no team enjoys facing.

At 25, George Glendon is starting to come into his own. The Manchester-born midfielder inspired in his display during home wins over Guiseley and AFC Telford United. They would have made it a clean sweep had Bradford (PA) not bitten them last in their last match of the month.

Glendon’s displays are getting better with every week and they haven’t gone unnoticed.

We love the Vanarama Volunteer of the Month Award as those who give up their time are rightly acknowledged.

Philip and Denise Stevens mean so much to Brackley Town - especially at the current time.

Philip has gone above and behind in helping enforce the Covid protocols all clubs have had to follow. He has spent many hours working so the Northants side can provide a safe environment for players, staff and volunteers.

He is on hand any time of day and night as he helps the Saints with the huge challenge as the pandemic rages.

His wife, an NHS nurse, can’t go without a mention. Lending her expertise, Brackley say they couldn’t operate without Philip and Denise’s around-the-clock efforts.