The National League Clubs Hoping To Pip Rivals To The Post! 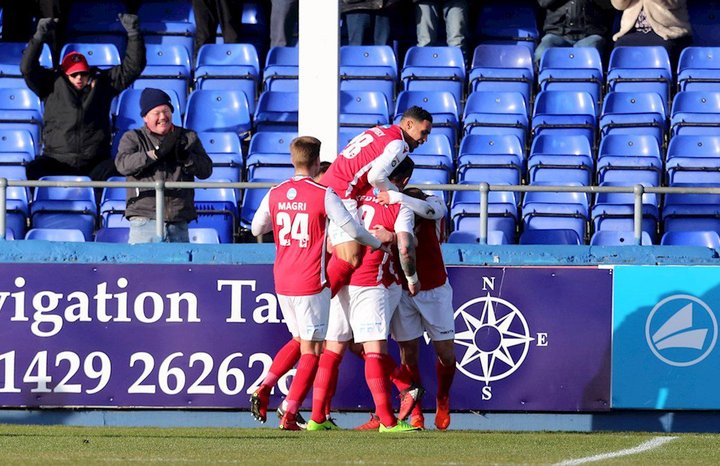 On Gold Cup day at the 2018 Cheltenham Festival, what better way to mark the occasion by taking a look at the National League clubs making their own dart on the inside straight.

The race for the play-offs is hotting up in all three divisions, but who’s making a late dash?

It’s the business end of the season and the finish line is in sight, with the reward of promotion giving clubs the incentive to put together a run that could well see them nip in at the last minute.

Form is crucial at this stage of the season and we all know that winning breeds confidence.

Clubs have nothing to lose when they’re outside of the play-off places, so all the pressure is on those currently in one of the top spots.

We’ve picked out a club from each division that are in form, full of confidence and applying late worry on those above.

They were tipped as an outside bet for the play-offs at the beginning of the season following their promotion from the National League South and Daryl McMahon’s side could well pull it off.

Four wins from their last five have moved them to within just four points of the top seven.

Fleet have got some mammoth fixtures ahead them, with Dover, Macclesfield, Wrexham and Sutton all yet to visit the Kufflink Stadium. These are the tests that will determine whether or not a play-off finish is achievable.

With Danny Kedwell, Luke Coulson and Co firing on all cylinders, the dream of consecutive promotions could remain a possibility.

The turnaround under Kevin Davies at Southport has been nothing short of remarkable. The club sat in 21st place at the start of 2018, but are now just one point off the play-offs.

Davies, who failed to win any of his opening 10 games in charge, has masterminded an upturn in results that includes eight wins from their last 10 and a record six successive home victories.

When you’ve got February Player of the Month Jason Gilchrist in your side, you can’t write yourself off!

However, Port will face a real test of character as they’ve still got games against York, Salford, Blyth Spartans, Harrogate, Brackley and Spennymoor to come.

Only leaders Havant & Waterlooville are in better form than 13th placed Gloucester. The Tigers ended 2017 with five defeats from six, but the New Year has brought new life to the club.

Marc Richards took over from Tim Harris in December and has pulled the team away from the threat of relegation.

While there is still a seven-point gap between themselves and the play-off places, Gloucester will fancy their chances with fixtures to come against those below them and there’s the opportunity to take points off those above.

 Stones Players Told: This Could Be Once In A Lifetime Chance Wealdstone manager Bobby Wilkinson wants his players to have absolutely no regrets after their FA Trophy destiny is decided.