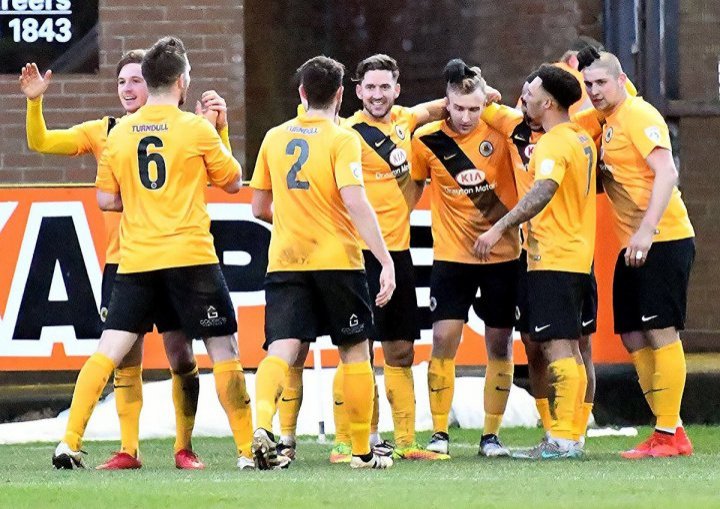 There was plenty of important of results in the Vanarama National League North, but which players really stood out?

Salford City came back from 4-0 down to draw 4-4 at Kidderminster Harriers, while North Ferriby United did the double over Blyth Spartans, writes Tom Feaheny.

But who were the players that made it all happen?

As we do every week, we get on the phone to club officials, reporters and managers to gage their views on the weekend’s best - and build a squad of 16.

Here is what we’ve come up with following Saturday’s National League North games.

How do you rate our selection process? Take your view to twitter and let us know your views @TheNationalLge

Goalkeeper: Ross Durrant (North Ferriby United)
The Villagers claimed all three points with Durrant making a number of fine saves to help his side.

Defence: Tom Allan (Alfreton Town)
In a game where the Alfreton defence had to be at its best, Allan helped lead the line and opened the scoring as well.

Defence: Ryan Qualter (Boston United)
Qualter delivered some key interceptions and his work at full-back helped Boston get on the attack as well.

Defence: Josh Heaton (Darlington)
A clean sheet on the road for Darlo, Heaton again impressed at the back.

Midfield: Jack Emmett (Harrogate Town)
In a game against a tight defence, Emmett's trickery was key to unlocking it and helping his side.

Midfield: Jeff King (FC United of Manchester)
What a way to leave a club, King bowed out with a hat-trick as he returns to Bolton Wanderers after his loan finished.

Midfield: Sam Walker (Curzon Ashton)
Now not many will miss a penalty and still get in! But Walker's performance was the difference as Curzon gained a big win.

Midfield: Elliott Newby (AFC Telford United)
On another day Newby could have been on the scoresheet, his hard work and skill created several openings.

Striker: Reece Thompson (Boston United)
He scored the crucial winner for his side and also showed his usual high-level of work rate.

Striker: Mark Beck (Harrogate Town)
The reason why Simon Weaver brought him to Town, a goal and his physicality helped Town to an important win.

Two Beat-The-Deadline Signings For FC Halifax  FC Halifax Town confirmed the signing of Jacob Hanson and Sam Graham ahead of the deadline.