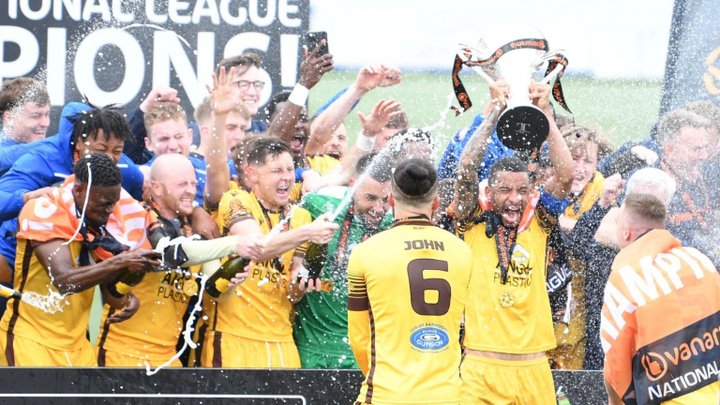 Sutton United have been crowned the 2020/21 Vanarama National League champions.

The U's will start next season in the EFL for the first time in their 123-year history, after a 3-0 win over Hartlepool United.

Over 1,000 fans were in attendance to see them over the line - Rob Milsom opening the scoring when his free-kick was fumbled over the line by the Pools' keeper Brad James.

As the home side turned up the heat, Louis John saw his deflected strike make it two before Isaac Olaofe's solo effort made sure.

"Words can't really describe how I am feeling right now," Gray, who is in his first managerial role, said.

"There are so many good teams and managers in the division and you look at the size of the clubs and for us to come out on top is an unbelievable achievement.

Attentions have already turned to celebrating the historic win with Gray still pinching himself for now.

"To see Sutton United as a Football League team for the first time in our history hasn't sunk in yet," he added.

"It's my first title win and I'm sure we'll have a good night tonight.

"The team spirit has been unbelievable, led by the captain Craig Eastmond and vice-captain Harry Beautyman.

"I could go on and name every player, I'm so proud of every single one of them - it's been a squad effort."

What Happened On Saturday In The National League?  Sutton United will be crowned champions on Sunday if they beat Hartlepool United after Torquay collapsed at home to Barnet.