Stringer Delight As Clarets Leave It Late At Welling United 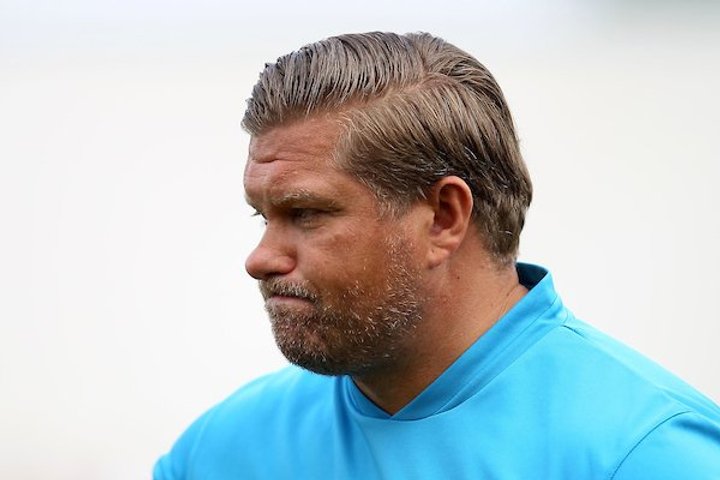 The Clarets were forced to wait until the 82nd minute before taking the lead through a Lee Barnard penalty, with the substitute striking placing his spot-kick to the left of Dillon Barnes with 8 minutes left.

Speaking afterwards, City boss Stringer revealed his delight at how well the Clarets played over the full 90 minutes.

“I thought the boys were tremendous. The first half was really tough, we know how they play here – they try and back you in and play off knock-downs in the box. I felt it was a really tough 45 minutes.

“I was pleased to come in at half-time level, I always felt we would have a chance in the second half with us going the down the hill. I felt they struggled a little bit, they got very deep, never really got out and never hurt us as the goalkeeper did not have to do much in the second half. Coming here on a Tuesday night, they are a big strong side, they have got some very senior players who like myself have been around. We just had to go toe-to-toe.

“Fortunately, we brought Lee Barnard on and if you’re ever going to see a bit of magic from the Premier League that was it, it was very clever body movement to get the penalty and he was keen to take it which he executed excellently. I thought overall the first half was even-stevens whereas second half we deserved the win.”

Welling held their own for large portions of the match with their strong physicality troubling the Clarets, but City’s desire and passion seeped through as they went in search for a late winner. But Stringer stated that he had upmost confidence that his side would get the winning goal as his team performed superbly in all positions.

“We had to deal with a lot of balls, there was nearly a penalty shout with Chris Bush. I do not know why he has handballed it but it’s on the edge of the box fortunately, that could have gone against us.

“I had to tell him to calm down a bit at half-time and second half he was excellent for us. When you look at Sam Beasant when he was called on early on, he made a great save. I think when you look at the back five they are all very composed, with Football League experience and they are a good back five.

“The midfield worked hard and when we changed to a diamond to get two up-top it changed the game. We changed to the diamond and when you have got people like Crag Braham-Barrett who can get out, he is very quick and mobile who can cover if needed. Elliot Omozusi showed Football League class and whenever he was needed he was there.”

Next up for the Clarets is an away trip to Bath City, a ground which has proved difficult to collect points at historically for City, but Stringer feels confident that if they prepare enough that they can return to Essex with the points.

“Bath is always a tough place to go. As long as we can get the coach to the go the right way unlike last time when we turned up 15 minutes before kick-off, and if we can play anything like we did on Tuesday night then we’ll be fine.

“We know they are big and strong and that they have signed some really good players and they’ll be another team that’s in and around it. We go there on Saturday with six points from six, confidence and we’ll make it very tough for Bath”.

 Morrell: Brakes Victory To Be Lambs' Season Kick Start Tamworth’s players have been urged to make Tuesday night’s victory at Leamington their season catalyst. Victory, they are told, can inspire a strong run of August form.

Kinnear Rues Missed Chances In Kent Derby Defeat  Chris Kinnear was left wondering how his Dover Athletic side managed to lose at home to rivals Bromley despite having so many chances at goal.