Stones Players Told: This Could Be Once In A Lifetime Chance 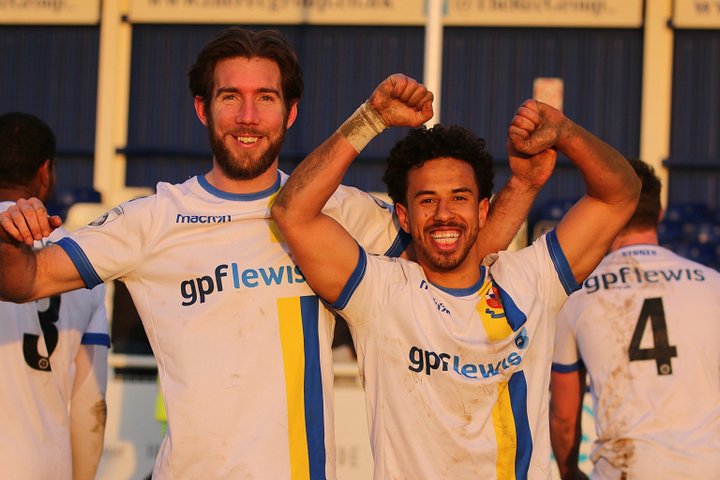 Wealdstone manager Bobby Wilkinson wants his players to have absolutely no regrets after their FA Trophy destiny is decided.

The Stones are gearing up for their biggest week in years when they face Brackley Town away and then at home in the semi-finals.

Wilkinson is well aware chances to walk out at Wembley are few and far between for anyone at any level of the game.

They National League South club are two matches from making the short trip across north west London to the National Stadium in May.

He feels his players must “enjoy everything and regret nothing” by the time next weekend is over and they know if they will have the chance of a lifetime.

The former Hungerford boss told us: “When you look throughout football at the sheer number who play the game or coach teams, the per centage of people who get to Wembley isn’t very big.

“So many don’t get the chance. We don’t want to look back and think ‘had an opportunity there, didn’t we?’ It will be a long summer if we don’t give this our absolute everything.

“It’s about leaving nothing out there. If we do that and still aren’t successful, hands up - it’s not meant to be.

“But we know if we play to our maximum we can give any side a game. We now need to put that into practice.”

Wilkinson was low after a harsh defeat at Havant & Waterlooville which they truly didn’t deserve.

He now wants to see the Wealdstone side who battered big spending Billericay Town into submission in the quarter-finals.

“We’ll get over Tuesday night pretty quickly,” he added. “We can’t dwell. We played well but we lost. Sometimes teams at the top of the table get that little bit of luck.

“Our focus now is on a massive, massive week for the football club.

“You don’t get this kind of opportunity very often. Everyone knows what it would meant to the area to get Wealdstone to Wembley but we have to focus on giving ourselves the best chance.

“Make no mistake, we’ll be ready. We’ll be set up well and ready to go.”

 Greaves: Concentration On Ourselves Is A Must FC United of Manchester player-manager Tommy Greaves, says something isn't clicking for his side as they have seen themselves five games without a win.

The National League Clubs Hoping To Pip Rivals To The Post!  On Gold Cup day at the 2018 Cheltenham Festival, what better way to mark the occasion by taking a look at the National League clubs making their own dart on the inside straight.