Stones Plan To Keep Rolling Back The Years Tonight 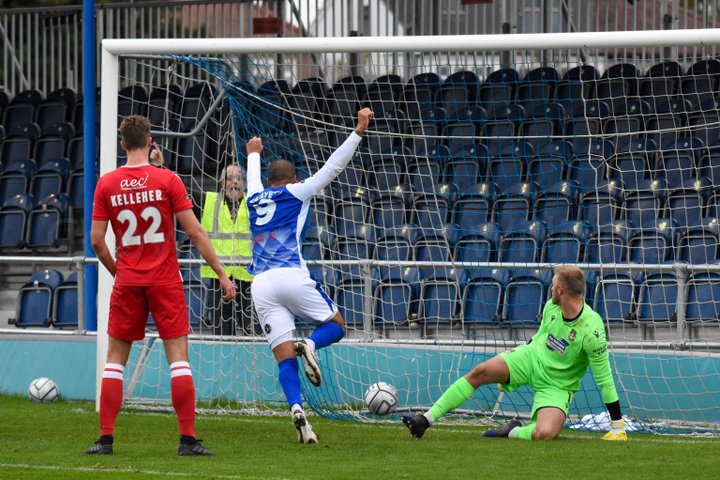 They had to wait some 32 years for their latest victory at National League level.

But Wealdstone manager Dean Brennan is desperate to make it a matter of hours until their next one comes along.

Saturday’s exhilarating 4-3 triumph over Wrexham was the first time the Stones have won a game at Step 1 since 1988.

Now they want to double up by taking the scalp of Chesterfield four days on.

The Spireites’ trip to north west London is the only game of the night, and a big chance for both to climb into the top half with three points.

Brennan is still beaming from Saturday and told the club’s video service: “These kind of matches are free games for us - teams like Chesterfield are expected to be at the top end of the division.

“Like I said when we played Stockport, these aren’t the fights we need to be picking but we have to be competitive and we have to give it everything we have got.

“This season we will need to be one of the hardest working teams, and so far we have shown that in all our games.

“The character and togetherness - nothing else is going to bring us success in this division.

“On Saturday we took the game to Wrexham and we scored some great goals.

“We have four points from four games - I actually think - bar the Stockport match maybe - that we should have got something from every game so far.

“What we will do is continue to play on the front foot but we do have to improve on the number of goals we are conceding.”

Chesterfield captain Will Evans told us after Saturday’s narrow defeat to Stockport that although the table may not suggest it, things are better than they were a year ago at the club.

His team have lost three of their first four matches - and sit third from bottom.

But the skipper said: “Sometimes when you haven’t got off to the greatest of starts you need things to go your way a little - against Torquay and Stockport, they didn’t.

“We are working hard. We do look more solid and I do feel we are a lot more comfortable than we were maybe at times last season.

“We had a disrupted pre-season. We can’t use it as an excuse but it does have an effect.

“As a group we are still learning. We have new young players here now and some news faces so it’s still gelling.”